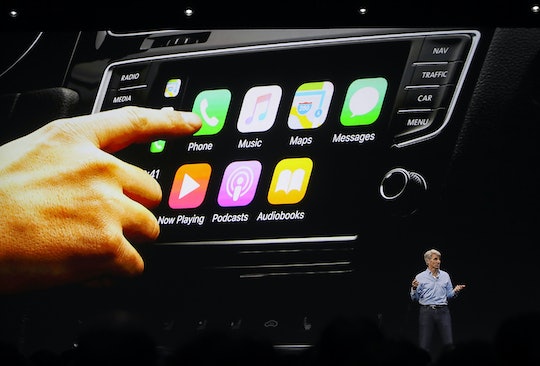 Every time Apple holds their keynote to announce new products and features, there's always one huge dud that riles Twitter up. And this year, there's a doozy. During the Apple event, Tim Cook announced that FaceTime will soon be able to handle group calls, with up to 32 participants. As you might expect, the tweets about group FaceTime show that literally no one wants this feature, much like wireless ear buds or Animoji before it.

But that's also what consumers love about Apple — the company always comes up with toys and features that we never even imagined we'd want and then eventually, we learn to love it. But something tells me that group FaceTime, with, I repeat, the capability to host 32 callers, might just never catch on.

According to The Guardian, tiles will shrink and change size depending on who's talking and will also support Animoji and the new Memoji. So brace yourselves. Or switch to a Samsung while you can. Did I mention that iOS 12's FaceTime will be integrated with Messages so that you can seamlessly switch from a group chat to a group call?

It might be good for working remotely or tweens that actually like talking to their friends, but for the average human being it sort of sounds like the devil himself devised this technology.

Mostly Because We Have No Friends

And Some Were Actually *Stoked* About It

All jokes aside, there's actually been a ton of interest in group FaceTime for a while now, according to Tech Crunch. Currently, millions of people are using Houseparty, an app that lets you hold group video chats with up to eight other people. It's not easy for some companies to make video chat apps that can handle more people than that, since hosting multiple livestreams is not easy. If anyone can do it right, it's probably Apple. BUt Houseparty has been handling group video chats for a while now, and with their updated app, it's worth checking out if you can't wait until September for group FaceTime.

Houseparty is popular with younger people, though the recent update is all about nostalgia. The new Houseparty Mac app looks just like the old AOL AIM chat box, whether you use it on your desktop or on your iPhone. Instead of text based messaging, though, you invite friends via video. The best part? You can set your status to "around," like the old school away message, sign off totally, or "wave" to your friends when you're good and ready for them to give you a shout.

The good thing about the desktop version of the group video chats is that you can also still use your phone and scroll through Instagram and do your thing on your phone, which you can't do if you're using the iPhone app. (And probably FaceTime when it launches the group feature in September, though it was unclear if you could swap in and out form the demo.) Sima Sistani, Houseparty's cofounder told Refinery29:

A big part of our mission is to connect people in the most meaningful way when they are physically apart. The way we achieve that is through something we call presence. I think there's something really special about having the right facial expression as opposed to the right emoji.

So despite all of the snark on Twitter about the upcoming group FaceTime feature, people love talking to their friends via a video call. Now, they'll be able to do it with all 32 of their closest friends.