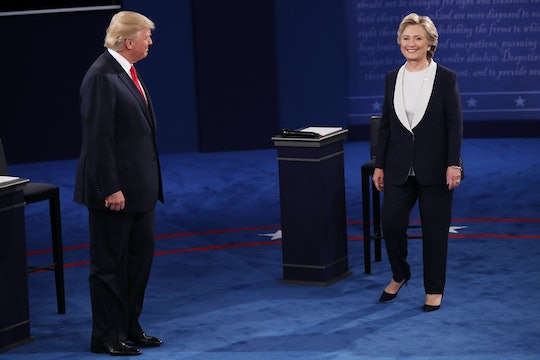 Talk about a mic drop moment. As the second presidential debate got underway Sunday night, Democratic presidential nominee Hillary Clinton made her feelings about Republican presidential nominee Donald Trump and the lewd, disturbing comments made on his leaked 2005 Access Hollywood interview perfectly clear. When the two candidates were introduced, Clinton would not shake Trump's hand. And the tweets about Clinton's refusal to shake Trump's hand immediately started rolling in.

While Hillary Clinton has made it clear that she plans to follow First Lady Michelle Obama's brilliant, classy, advice ("When they go low, we aim high"), she had a moment where she just. Simply. Could. Not. After all, Trump had made sure to start the debate by coming out aiming really, really low. He held a press conference before the second debate with women who were chosen specifically to disparage not only Clinton herself but also her husband, former President Bill Clinton. The press conference was not only focused on previous sexual misconduct allegations against Bill Clinton — he was clearly going into defensive, bulldog mode. He was spoiling for a fight, and perhaps she was spoiling for a fight as well. Because when the time came for the traditional handshake, neither of the candidates were especially interested. And the small moment did not go unnoticed by the internet.

The tone was set with the whole handshake debacle; the gloves were off for the two candidates. That thin veneer of civility was gone. This campaign has been unlike any other in living memory, and not really in a good way. The candidates must have both realized that they had hit a point of no return, where it would seem almost staged or forced to keep up the pretense that they were anything other than fierce adversaries. And so they did not shake hands. Big deal, right?

Actually... it is sort of a big deal. It's almost unprecedented to have two candidates as diametrically opposed as Clinton and Trump. As Clinton herself pointed out, she might not have agreed with her previous political opponents, but she didn't necessarily question their ability to rule the country. She made it clear that this was obviously not the case with Trump. Hence the whole #nohandshake thing.

At the end of the harrowing, aggressive, and exhausting debate, the opponents shook hands. But I wouldn't put any money on them letting bygones be bygones or heading out for a morning Hatha Yoga class any time soon.