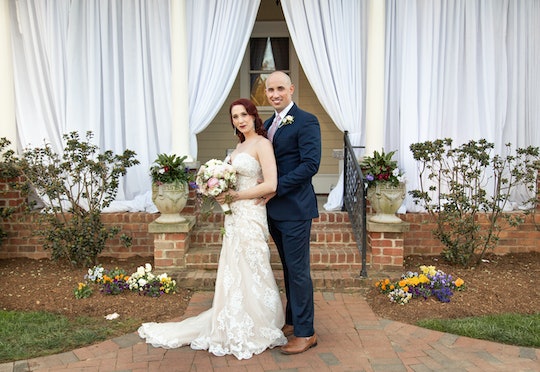 Twitter Was Impressed With Jamie's Shade-Throwing Skills On 'MAFS'

Season 9 Married at First Sight couple Jamie and Beth have one of the more ~passionate~ relationships on the show. Although they got comfortable with each other quickly, the couple has fought just as much as they clicked in the beginning. After the couple's explosive arguments, tweets about Jamie on Married at First Sight prove that, while Beth is certainly capable of getting some vicious digs in, Jamie can hold his own in the shade department.

Previews for Episode 8 already show the couple discussing divorce, but things between them began deteriorating when the couple brought their in-laws together for the first time. The Jul. 24 episode focused on bringing the MAFS couples' families together in their newly shared homes for the first time, and Jamie and Beth's experiences were not great. For starters, Beth got pretty defensive when Jamie's parents started quizzing her about her job. She had just accepted a position working for her dad, so jokes about the seriousness of her career started flowing early, and she was clearly feeling sensitive about it. Jamie didn't exactly join in with the parents, but he didn't defend Beth either. And in total fairness, even her dad jumped in on the ribbing.

But later, after Beth pushed just a little too hard on the details of Jamie's parents' divorce (a super sensitive subject for him), he lashed out at her over her career aspirations.

"On our wedding day, Elizabeth told me she was a sales executive at her dad's company," Jamie said in a confessional interview. "But it's kind of tough right now because I'm finding out that's not really the case with Elizabeth."

Once Beth backed off, Jamie grilled her on her job, asking, "Is this a handout or is this actually like, something you're trying to achieve?" His wife promised that she was super goal-oriented and ambitious, but Jamie still wondered if her dad was just doing her a favor.

"Does it bother you that I took an opportunity that my family handed me?" she finally asked.

"You took nepotism," he replied. "You didn't take an opportunity."

Yikes! Beth tried to defend her career savvy, explaining that she'd gotten every job she's ever interviewed for.

"Did your dad give you those interviews or other people?" Jamie fired back. The conversation was pretty painful to watch, but Twitter couldn't look away. And eventually, Beth did get her own jabs in.

At some point, Jamie calmed down and tried refocusing the conversation on their fizzling intimacy, and, to his credit, he approached it pretty compassionately. But Beth was still feeling the sting of their earlier conversation and came back with some wicked burns. She complained that the reason she was less interested in sex was because she wasn't being romanced anymore.

"This is the first time you've ever brought me flowers or anything. Not even like a back massage, nothing. You don't initiate anything," she said. "You just do like, basic caucasian sex. It's like, bam bam done."

That line earned her some Twitter fans of her own. But being the MAFS fan favorite just because your fights are the most entertaining to watch doesn't actually bode well for the longevity of your marriage. Viewers will have to wait and see if Jamie and Beth can recover from their well below the belt argument in therapy next week.