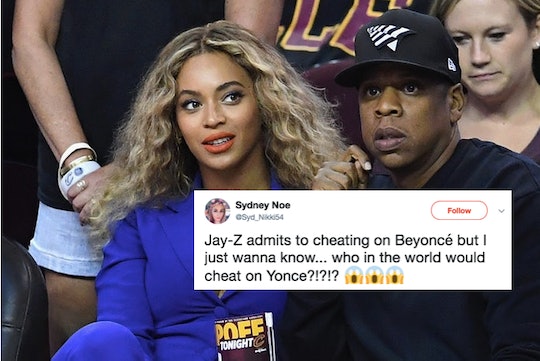 Ever since Beyoncé dropped her visual album Lemonade in our laps in 2016, fans have had questions. About the inspiration behind the songs, most of which were filled with real, raw emotions that seemed to be clearly personal. Songs about infidelity, female empowerment, and yes, perhaps a little revenge aimed at "Becky with the good hair." But neither the Queen nor her King, rapper husband JAY-Z, were talking. Then came the apologetic tone of JAY-Z's album, 4:44. Still more questions, still no confirmation. Well, now that some questions have been answered, these tweets about JAY-Z cheating on Beyoncé prove fans are going through some feelings about the revelation, and they're working those feelings out as one does — through social media.

On Wednesday, rapper and music industry mogul JAY-Z confirmed in an interview with T: The New York Times Style Magazine that he had, indeed, been unfaithful to Beyoncé. While not trying to justify his behavior, JAY-Z explained how his own troubled childhood led to him to a place where he couldn't connect, and that led to his infidelity, as he told The New York Times:

Understandably, fans are dealing with some pretty serious emotions upon hearing the news.

Queen Bey is clearly a beautiful, talented woman. So one of the primary reactions to pop up on Twitter from women was shock that anyone could cheat on the Queen. And fear that, if even Bey is getting cheated on... what hope could there be for the rest of the planet?

Of course, this is simply a knee-jerk reaction. Women around the world certainly know that isn't the way infidelity works, I'm sure. It's not about attraction in a lot of cases; as JAY-Z admitted himself in his New York Times interview, his infidelity was about dealing with deep seated emotions from his childhood.

While some fans were shocked that JAY-Z would cheat on his wife and the mother of his three children (daughter Blue Ivy is 5-years-old, while twins Sir and Rumi are only 5-months old), not everyone thought the news was terribly jaw-dropping. After all, Bey did put out Lemonade, an album that appeared to confirm a flurry of rumors about her relationship with JAY-Z and his infidelity. Plus, there was JAY-Z's 4:44, and let's go even further back; who could forget the video of Bey's sister Solange being physically restrained as she attacked JAY-Z, reportedly because of his cheating? So for some fans, this confirmation was sort of old news at this point.

JAY-Z said in his New York Times interview that he and Beyoncé created music together and used their art almost "as a therapy session," working together and having "lots of conversations" to fix their marriage. But don't go thinking that mean fans are ready to forgive and forget just yet. They need a moment to deal with this new reality. A reality where someone cheated on Queen Bey, a reality no one really wants to deal with.

All things being equal, JAY-Z and Bey look to have worked things out. They have new little twin babies, JAY-Z's 4:44 was nominated for eight Grammys, and they seem more together than ever.

But maybe they should just give fans a moment to process this infidelity news. It's a lot to take on.