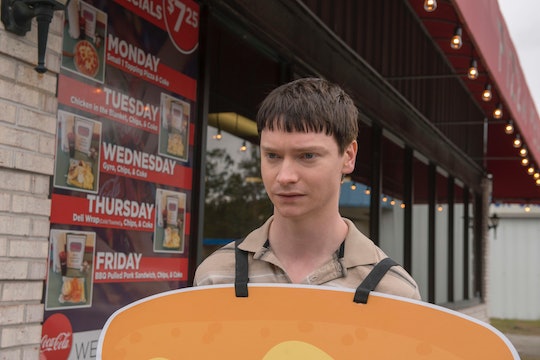 The story of Gypsy Rose Blanchard and her mom, Dee Dee Blanchard, is one that still has fans scratching their heads now that The Act on Hulu is coming to an end. It’s understood that Gypsy Rose was a victim of Munchhausen by Proxy and that her mother had spent Gypsy Rose’s entire life having her daughter treated for diseases that weren't actually present. But what some viewers are still curious about is Gypsy Rose’s boyfriend and tweets about Nick Godejohn on The Act prove how unhealthy that relationship was.

Some fans of the Hulu miniseries have tweeted out support for either Gypsy Rose or Godejohn, but at the end of the day, it’s really about understanding how toxic their relationship was from the start. As shown in The Act, their relationship was born out of Gypsy Rose’s need for attention from someone other than her mother and other than someone who felt sorry for her. It wasn't long before it spiraled out of control and went from bad to worse as Gypsy Rose and Godejohn plotted her mother’s murder.

It's obvious that their relationship wasn't good for either of them and people who are watching The Act on Hulu are a little bit dumbfounded by so many aspects of their romance.

The Act still has another episode left to finish out the story, and in real life, Gypsy Rose and Godejohn’s relationship was short-lived following the death of her mother. In 2018, more than three years after Dee Dee’s body was found stabbed to death in her Missouri home, Godejohn was found guilty of murdering her and later sentenced to life in prison. During the trial, his attorneys argued that Gypsy Rose had manipulated him and used his love and "obsession" of her to convince him to kill her mother.

Gypsy Rose herself testified that she had asked Godejohn to come to Missouri to kill her mother because it was the only way she could think of to escape from under her and get away from the abuse. In her own trial, Gypsy Rose was sentenced to 10 years in prison for second-degree murder. Although the crime is, in a way, behind the couple, The Act viewers are just starting to learn about their ill-fated romance.

Some people on Twitter have made light of Godejohn and Gypsy Rose’s relationship. They have joked about his reaction to the crime and the aftermath of their short-lived life together back at his home in Wisconsin.

Others are still confused about Godejohn’s mental state and whether or not his court ruling was fair. One of the things his attorneys had argued in favor of a lighter sentence was that he is autistic and didn't have the mental capacity to have committed a premeditated crime of that magnitude. Some of those who have viewed The Act seem to agree.

There are also fans of the show who have enjoyed it, but find it hard to feel for either Godejohn or Gypsy Rose. They have pointed out that the couple pleaded guilty to taking part in a horrendous crime and that the miniseries has only shed light on that. Where others might find it easier to feel sorry for one or both of them, some people just aren't having it.

In real life Gypsy Rose has spoken out against The Act and told Bustle in a statement that she will be taking legal action against the show’s creators because the writers did not ask for her permission to use her name or her story. "I feel it is very unfair and unprofessional that producers and co-producer Michelle Dean has used my actual name and story without my consent, and the life rights to do so," she said in the statement.

Although The Act has dramatized not only her story but also herself and the people in her life, some of those who have watched The Act have already formed their own opinions about everyone involved, including Godejohn.