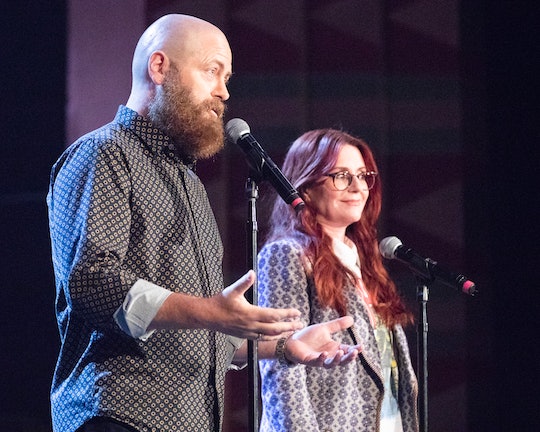 As legendary sitcom actors, Nick Offerman and Megan Mullally's fans apparently expect them to do very serious-type comedy only. Tweets about Nick Offerman and Megan Mullally on The Bachelor positively roasted the couple for appearing on the show. And even though they were an oddball choice given the audience, the real-life couple still delivered on hosting an entertaining (read: mortifying) group date.

For Colton's first group date of the season, he invited eight women to a blackbox theater in LA, where Parks & Recreation's Offerman and Will & Grace's Mullally were waiting on stage. They each told a compelling story about their first time having sex, and while Offerman's was a little more dressed in metaphor, Mullally's peppered through a healthy number of F-bombs. It was a little uncomfortable, and the contestants didn't really seem to ~get it~, but the couple eventually revealed that everyone on the group date — save Colton, of course — would be prepping their own stories about a first of their choosing to perform in front of an audience of 200 later that night. Each woman on the date then scampered off to write down her storytelling set and prep her material.

The ladies on the date opted to infuse their storytelling with just a bit more innuendo, rather than taking their hosts' more straightforward approach. Some were about first sexual encounters, some were about first sexual encounters with virgins, and one was about a Miami native's first white boy (!). But Demi, the forward 23-year-old who opened up about her mom being in federal prison on the very first episode — marched straight up to Colton at the end of her set and planted a kiss on him. (It was the story of their first kiss...get it?)

The whole thing was brutally awkward, as "performance" group dates are wont to be, but Colton managed to stay smiling through it all. As for viewers' response to Nick and Megan, it was pretty rough. Some fans were upset that the women on the date didn't seem to recognize the comedians (even though one contestant heroically managed to namedrop both of their shows in her confessional interview). Others thought that Offerman and Mullally were "above" The Bachelor and didn't understand why they were participating.