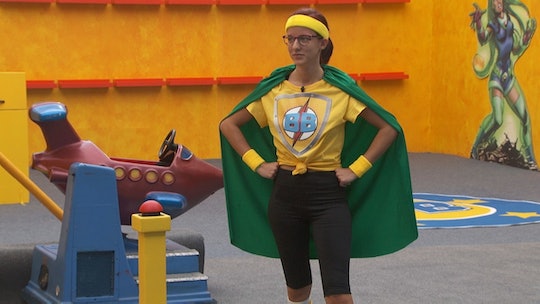 Nicole on Big Brother made it to final four with her longtime alliance of Cliff, Holly, and Michie. But even though she won the HOH right afterward, she and her final two partner Cliff failed to win the power of veto, so Jackson had the true power and sent Cliff to jury. Now she is on her own against a showmance but tweets about Nicole on Big Brother reveal that fans are hoping for a miracle.

I don't blame them, Nicole is one of the reasons I have enjoyed Big Brother this season, but being the lone wolf against two people that sleep in the same bed at night is a worse position to be in than a normal two-against-one scenario. Nicole shouldn't be resigned to becoming the final member of the Season 21 jury without a fight. Cliff told Entertainment Weekly in an exit interview that she was a strong player and he was already contemplating his argument against her if they made it to the finale together. "Nicole racked up wins towards the end, she built up a much better resume. I would have argued I was a fighter from the beginning and I could have argued for the victory," he said.

Cliff's choices are why he's in jury right now, having left Nicole with a harder fight to the end than she originally wanted. But tweets about Nicole on Big Brother reveal that fans have a lot of hope for her in the game and beyond.

She's definitely trying her best to keep playing though. One account that updates fans on the live feeds in the Big Brother house reported Nicole making individual pleas to both Holly and Jackson to sit next to then in the finale. Both of them have reportedly told cameras they are considering taking Nicole, though it's hard to believe.

Nicole is doing everything in her control to win the game, but there is a title other than "Big Brother 21 Winner" that may actually mean more to her. Fans vote to give one houseguest the title of "America's Favorite Player," which comes with $25,000. Twitter is hoping Nicole wins.

She already has her own hashtag ahead of the finale —#NicoleAppreciationParty. As it suggests, the hashtag is full of tweets of love for the Long Islander.

Even if she doesn't win any money on the finale, Nicole told Big Brother fans via the live feed cameras how much she's cherished the experience.

"I wouldn't have traded [this experience] for anything in the world, even though...It's been hard, it's been stressful," she said in the video above. "I hope I did [some of] you all proud."

She also used the platform to give little girls who may not feel like they can reach their goals some confidence. "You can literally do anything as long as you don't hurt yourself or others — live your dream and live your truth."

Nicole may not be the Big Brother 21 winner that fans will get, but she's the one they deserve.