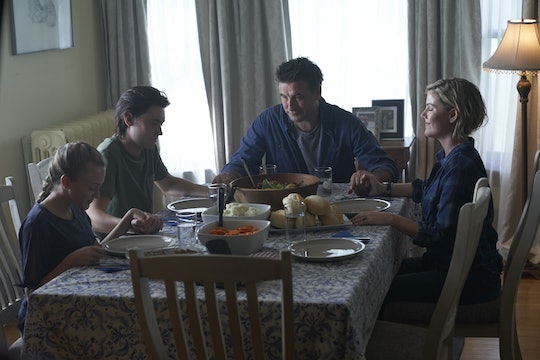 Fans Of 'Northern Rescue' Have Some ~Thoughts~ About These Romances

Northern Rescue has a lot going for it: a stellar cast anchored by big names like Billy Baldwin and Kathleen Robertson; up-and-coming stars Amalia Williamson, Spencer Macpherson, and Taylor Thorne; and a family dynamic that attracts teens and their parents alike. Plus, there are ships for everyone who needs romance. Maddie and Henry, Gwen and Scout, Charlie and Alex — (ugh I shuttered as I typed that last name). But all you have to do is browse some tweets about Northern Rescue to see that everyone's favorite ship is Tux the penguin. Tux solo, Tux and Taylor, Tux and Maddie, Tux and Gwen. It doesn't matter. Fans just want Tux. And I don't blame them.

Warning: Spoilers ahead for Season 1 of Northern Rescue

The other ships on the show are just too problematic. Let me explain, starting with Charlie and Alex. Before the West family moved to Turtle Island Bay in Canada to be closer to Aunt Charlie following the death of her sister Sarah, Alex and Charlie were married. But she had a miscarriage, which lead to their marriage falling apart.

Charlie's individual story on Northern Rescue picks up with her seeking a signature from Alex to finalize their divorce. He wins her back rather quickly, so it's easy to spot that trouble is on the way. In the Season 1 finale, Charlie learns that Alex has committed some financial fraud, so who knows what he's capable of. It's quite the polarizing issue when you think about it. Fans were screaming at their TV sets hoping Charlie would figure things out.

Other people addressed their concerns directly to the cast.

And others made a pretty apt comparison to Keeping Up With The Kardashians.

It's safe to say no one is rooting for Alex. Fans just want to know what happens to Charlie. But there's another romance on the show that has the internet a bit more torn: Henry and Maddie. Their story is simpler. He pines for her throughout the whole season, and she doesn't seem to have a clue. Some people, like actor and comedienne Maysoon Zayid are all for the relationship.

"The way Henry looks at Maddie, Scout and the mama bear and all things Tux," Zayid tweeted to the show's account when asked about her favorite 'quiet' moments from the show.

Others are not quite feeling Henry.

It may be true that boyfriends come and go, but Henry seems to be a better friend to Maddie than Gwen, romance or not.

Speaking of Gwen, Maddie's brother Scout wants her so badly he beats up a guy in the finale for hooking up with her (this is after he misses his Boston girlfriend so he runs back to be with her without telling anybody(.

But early in the season he misses his girlfriend so badly he runs back to Boston without telling anyone. Suffice it to say he should find a better way to express his feelings. And Twitter clearly agrees.

But there is something between Scout and Gwen that some Tweeters want to see more of.

Perhaps if Gwen could learn to be a better friend to Maddie, it would be easier to get on board with that one.

Of course, no one should forget John and Sarah. Even though Sarah is alive only in memories now, this couple anchors the show the way that Jack and Rebecca do on This Is Us. Their relationship feels real and important, making episode where Taylor throws John a wedding anniversary party especially bitter sweet.

It's plain mind blowing that John is not Maddie's father. Suffice to say that all of the ships on Northern Rescue are complicated.

With all of these confusing relationships happening (or not happening) all the time on this show, it's no wonder that people now really just want Tux the penguin to be happy. If Tux can be happy, then maybe that's enough.

There's no word yet on a Season 2, but if you like penguins (and who doesn't) I suggest getting on the Northern Rescue train right now.