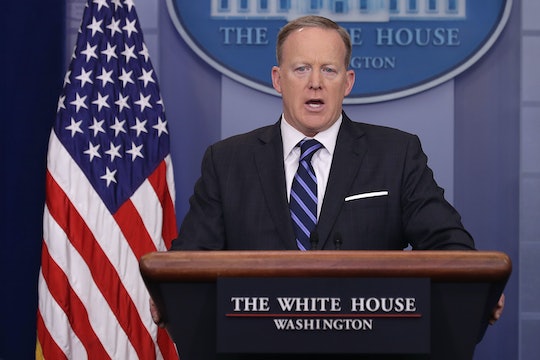 Living in the 21st century is an incredibly difficult time for people with chronic foot-in-mouth disease. Right, Sean Spicer? At a White House press briefing on Tuesday, White House Press Secretary Spicer was attempting to (rightfully) condemn Syrian leader Bashar al-Assad's use of chemical warfare. How did he do this? By (incorrectly) claiming that "not even Hitler" used chemical weapons. Unfortunately for Spicer, Twitter is a thing in the 21st century. And the onslaught of tweets about Spicer's "even Hitler" comments are proof of a few things.

First, the Twittersphere will not let anyone away with being so woefully ill-informed, least of all a person like Spicer, who holds an important position in the Trump administration and should know better. Which brings me to my second point: Spicer is clearly never going to catch on here. Despite several questionable gaffes in his fledgling career as White House press secretary, Spicer still doesn't seem to consider the weight his words could carry. For instance, comparing Adolf Hitler favorably with anyone, ever. Or saying that he didn't use chemical weapons during World War II:

We didn’t use chemical weapons in World War II. You know, you had someone as despicable as Hitler who didn’t even sink to using chemical weapons. So you have to, if you’re Russia, ask yourself: "Is this a country that you, and a regime, that you want to align yourself with?"

Of course, Hitler did, indeed use chemical weapons during World War II. According to the World Holocaust Museum, concentration camps killed approximately 6,000 people per day with hydrogen cyanide in gas chambers. By the end of the war, more than six million Jewish people had been killed. When a reporter asked Spicer to clarify his comment later in that same press conference, Spicer pointed out that he meant, like, a different kind of chemical warfare:

I think when you come to sarin gas, there was no … he was not using the gas on his own people in the same way that Assad is doing. There was not … he brought them into the Holocaust centers, I understand that. But what I’m saying is the way that Assad used them, where he went into towns, dropped them, the use of it — I appreciate the clarification, [denying that Hitler used gas] was not the intent.

Twitter took notice of his ridiculous gaffes, of course.

Some Twitter users noted the dreadful irony of Spicer minimizing the effect of those so-called "Holocaust Centers" during Passover.

Just as it would be atrocious for anyone, anywhere to minimize Assad's use of chemical warfare last week in Syria, it remains unconscionable to call forth any act of Adolf Hitler's as a favorable comparison. Sure, Spicer released a statement after the press conference to clarify his intention:

In no way was I trying to lessen the horrendous nature of the Holocaust.I was trying to draw a distinction of the tactic of using airplanes to drop chemical weapons on population centers. Any attack on innocent people is reprehensible and inexcusable.

But the damage was done. Once again, Spicer's words are out there. Whether he likes it or not, his job requires him to actively, and quite literally, choose his words wisely.

And once again, he has failed miserably.