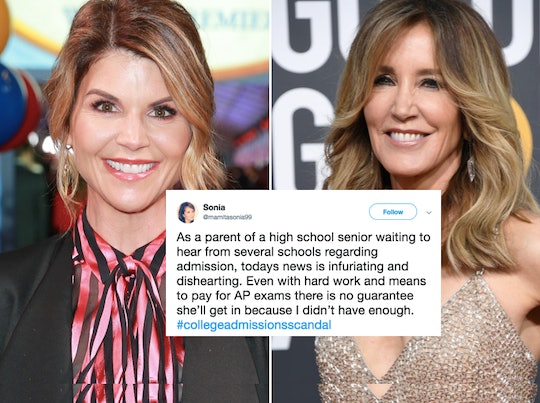 A lot of Americans woke up on Wednesday morning feeling disillusioned, I think, all because of the college admissions scandal dominating headlines for the past 24 hours. I suspect some people might have often wondered if wealthy parents were somehow getting their kids shuffled to the head of the pack through nefarious deeds, but to actually be confronted with the reality? It was difficult. Especially for parents who worry about how their own kids will get into college. The myriad of tweets from parents about the college admissions scandal prove moms and dads are beyond frustrated. Not all that surprised, perhaps, but frustrated nonetheless.

For those who aren't aware, the FBI recently revealed it had reportedly uncovered a massive college entrance exams scandal that found 50 people in several states charged in a case called "Operation Varsity Blues," according to CNN. It's the biggest scandal of its kind to be unearthed in history, as The New York Times reported, with more than 200 FBI agents looking into the practices of parents who were allegedly paying millions of dollars to get their kids into top schools like Yale, Stanford, and the University of Southern California.

The universities in question were not implicated as part of the investigation, but two Hollywood actresses, Felicity Huffman and Lori Loughlin, as well as CEOs, were charged along with the other parents, as reported by Deadline.

Fuller House actress Loughlin and her husband, designer Mossimo Giannulli, have been accused of allegedly paying $500,00 to William "Rick" Singer, who has been indicted on charges as well, to have their daughters designated as college rowing crew recruits for USC in order to guarantee their entrance despite the fact that neither were on the team, according to ABC News.

Meanwhile, Transamerica actress Huffman has been accused of allegedly paying $15,000 in a disguised charitable donation scheme in order to have Singer arrange for someone else to take their daughter's test, according to NBC News.

Romper's request for comment from Huffman's rep was not immediately returned and a rep for Loughlin told Romper, "I don’t have any information at this time."

Ever since the news that very wealthy parents were, according to reports, essentially buying their kids' way into schools was announced, Twitter has been lighting up with various reactions from parents.

Many Labeled It As Ultimate "Helicopter" Parenting

Many people took to Twitter to share their irritation with so-called "helicopter parents," essentially parents who hover above their children ready to swoop in and save the day to ensure their never experience an ounce of trouble.

Many Called The "Privilege" Factor

Several parents vented their frustration at the extreme hubris of elite parents, who will simply pay for their child's spot in college because they've apparently grown so accustomed to getting whatever they want.

Many Asked: What About The Other Kids?

Perhaps one of the most disheartening elements of this whole college admissions scandal is the fact that it negates the old American belief that hard work will get you whatever you want. What does this tell kids who have been working hard to get good grades but simply don't have wealthy parents?

Some Were Horrified By The Alleged Disability Scam

Several parents were especially horrified and offended by the report that there was reportedly a disability scam at play, where some parents allegedly fabricated a disability accommodation for their child in order to get them more time with their SAT, as reported by The Mighty.

The Department of Justice has seemingly exposed a massive issue within the college admission process. The idea that parents can potentially buy their children a spot at a top college when millions of kids (and their parents) are knocking themselves out trying to succeed is grotesque. Hopefully, as a society, we will see a change in the future, because parents have made it clear they won't stand for this inequality.

More Like This
How To Get Free & Inexpensive Back-To-School Supplies
Can We Fix The One Big Problem With The PTA?
These 21 Educational Board Games Are Perfect For Homeschoolers
Teachers Reveal The Go-To Movies They Love To Show In School & Why