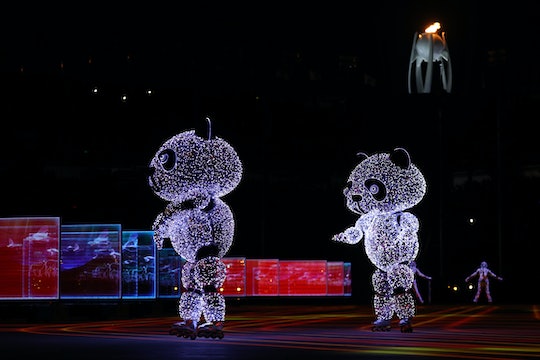 The Olympic flame for the 2018 Winter Games has been extinguished, not to be lit again until 2022 in Beijing, China. The closing ceremony is over, and here is why this is so sad: no more killer K-pop performances. No more beautiful mystical performances like the 13-year-old guitar wunderkind. And no more skating panda bears, who, let's be honest, really stole the show on Sunday night. In fact, these tweets about the pandas at the closing ceremony are proof that there's literally nobody who doesn't love a good, magical, skating bear.

The 2018 Winter Games were essentially all about a different animal entirely for the past two weeks; a sweet white tiger named Soohorang. He was the mascot of the PyeongChang games, and fans loved him. In all of his many versions; there were small stuffed Soohorangs handed out to athletes at the Winter Olympics, children sang their national anthem with plush Soohorang hats on their heads. That lovable white tiger was everywhere, and nobody minded it for a minute. But as the games drew to a close, a new animal was making itself known. A new mascot from China, who showed up for a sneak peek during the closing ceremony as a little taste of what we might expect at the Beijing Winter Olympics in 2022.

And not just any old panda; a duo of giant, illuminated skating pandas. Who also flew through the sky, thank you very much.

Just in case you were curious, Twitter didn't exactly hate the skating pandas with their smiles and their genial hand-holding. Maybe Twitter sort of loved it.

The closing ceremony of the PyeongChang Winter Games was a true spectacle. There were light shows and giant turtles. There were smiling children holding light globes that represented snowflakes, and K-pop performances and drones painting pictures in the sky of the mascot Soohorang. And then there's the whole political aspect; South Korean President Moon Jae-In sat with North Korean General Kim Yong Chol and President Donald Trump's adviser (also daughter) Ivanka Trump. It was a fraught situation, considering the enmity between North Korea and both the United States and South Korea.

But man, people really loved those skating pandas. If I was going to try to break down all of the reasons why these pandas struck such a chord with Twitter users, I would break it down thusly:

It's time for disco to make a comeback, and who better to bring it back than a pair of shimmering roller pandas? Because yes, they are on actual roller skates, which to me is somehow even better than being on actual skates.

Have you ever seen the futuristic movie Tron, where a computer hacker gets sucked into the digital world and has to compete in all of these gladiator-type games? If you saw the closing ceremony, you saw a better version with pandas and you're welcome.

To really be a memorable roller skating illuminated panda bear is to take flight, I suppose. Because that's what seemed to put Twitter over the edge.

There were other elements that made these panda bears memorable, of course. Their permanent, affixed smiles. Their cuteness quotient, which I would rate somewhere between adorable and squeal. But perhaps it wasn't just the flying and the lights and the spectacle that had Twitter so worked up over the panda bears. Perhaps it was what they represented. Now that the Winter Olympics has ended for another four years, these silly, show-stopping pandas are our proof that there will be another Winter Olympics. That the show will go on.