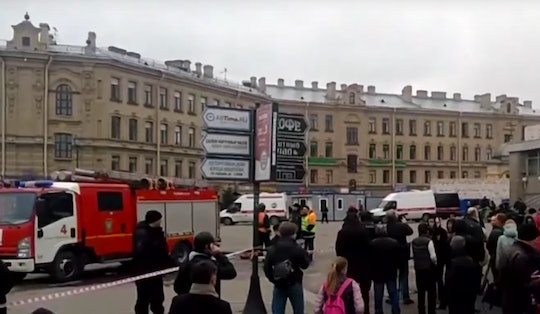 On Monday, a blast rocked the metro in St. Petersburg, Russia. At least 10 people were killed as a result of the terrifying ordeal, BBC News reported, and authorities are investigating all possible causes. While it's not yet clear whether it was an attack, an accident, or another cause that led to the mayhem and heartbreak, tweets about the St. Petersburg explosion show that, around the world, all eyes are on the horrific event.

The explosion affected the underground stations of Sennaya Ploschad and Tekhnologichesky, which are close to each other. Although initial reports stated that there were two separate blasts, Reuters later provided an update that one blast erupted between two stations.

Russian President Vladimir Putin confirmed that terrorism is one of the causes being investigated, and for good reason: Russia’s National Antiterrorism Committee confirmed that "an unidentified explosive device" caused at least one of the explosions, The Washington Post reported. And in addition to the the 10 believed to have been killed by the subway explosion, local media reports indicated that about 20 others were hurt.

Some news outlets reported that, actually, about 50 additional people were hurt, based on information about casualties from the St. Petersburg governor’s office. The Post clarified that it's unclear whether or not this number includes the dead.

CNN reported that Putin himself was in the city at the time of the ordeal, which resulted in the precautionary shutdown of the entire subway system in the city.

According to BuzzFeed News, images and videos of the scene are making the rounds on Russian social media. These include images of wounded people on the ground that the outlet cautioned are "unverified," as well as smoke-filled platforms.

And from the ground, one witness described a harrowing scene to CNN. Stanislav Listyev was in the Sennaya station at the time of the explosion:

I was going going down the escalator at Sennaya square at about half past 2, and at that moment I felt an explosion wave underneath. Everything was filled with smoke, people started panicking. So the trains stopped and almost immediately the evacuation started.

The Washington Post's David Filipov described the security to get into the metro, which includes metal detectors, as "lax." He wrote, for example, that staff there will admit a person carrying a concealed metal camera and a tripod.

When a tragedy unfolds in any part of the world (especially one that very well could have been terrorism), commentary often turns to the political factors that define that country and its relationship to the rest of the world. For example, much of the world is outraged by the Russian government's controversial role in the civil war in Syria. Still, it's important to remember that the Russian people should not be condemned for it, as comedian Nick Jack Pappas pointed out in a tweet:

It's also not helpful to add this to the ongoing global immigration debate without more verified knowledge about the cause, Conran McMullan of the BBC noted:

As always when a deadly event devastates a nation, it's time seek facts, offer support, and engage in a conversation about determining ways to prevent it from happening again. Jumping to conclusions is never productive.