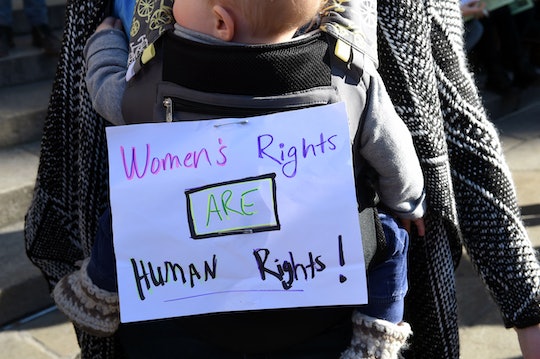 Best Tweets From The Women's March

The Women's March on Washington is shaping up to be the first of its kind. Along with its sister marches all over the world, the Women's March is embodying what it is to protest in the 21st century. A crazy, emotional, ever-evolving, well-organized bit of chaos that has never fully been seen before the advent of social media. These tweets about the Women's March are proof that we are living in a different world these days. And I guess it's time to just embrace it.

As hundreds of thousands of people march on Washington, clogging up public transit and making the world a better place one clear backpack at a time, President Trump spent his first day in office behind golden curtains. No, I'm not going to make a terribly obvious golden showers reference, but he really should have thought that one out, I think. As he remains cloistered in the White House, he has yet to respond to the march happening outside his window. Which is curious, when you consider his penchant for all things Twitter. I wonder if someone changed his password on him. At any rate, we wait with baited breath to get his reaction. And in the meantime... amazing tweets.

There's this guy using an image of Trump as Salt Bae, with which he will most likely become the next Salt Bae.

And this woman's t-shirt, which had better be available for purchase by end of day lest I lose my s**t.

Plus, did you ever think this picture would happen? All casual-like?

Of course, there are sister marches being held all over the country and across the ocean. One such march was being held in Sundance, and Parks and Recreation's Nick Offerman had a little something to say about that.

And then he did this. And now I'm in love.

Unlike the man who said this, who I don't really love at all.

There was one person who was oddly not in attendance... Hillary Clinton. The Former Democratic presidential nominee might not have been there in body, but her tweet proved she was there in spirit.

This ragtag group of "nasty" women even found a new way to get their message out... on maxi pads, obviously.

While the air was filled with the possibility of change, and possibility, and togetherness, this tweet sort of brought us crashing back down to earth.

The reality that, in 2017, women have had to congregate outside the White House to protest a decidedly misogynistic president, who was heard on tape bragging that he could "grab women by the p**sy" during the election and was still voted in to office, is sobering. And a reminder of how deceptively easy it could be to slip back a few centuries with the new administration.

But there is hope, right? As evidenced by these little nugget right here.

President Trump still hasn't responded to the Women's March. Despite the tweeting, which is basically his favorite. But here's the thing; women march on regardless. Armed with comfortable shoes, signs, fearless, hopeful grit, and cell phones.

The man doesn't stand a chance.