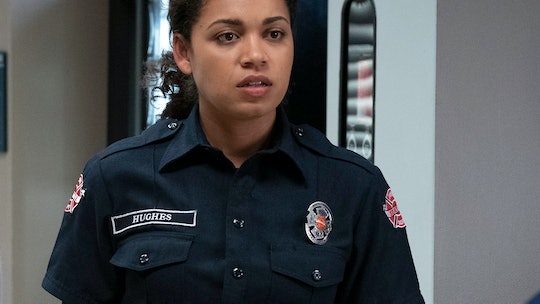 The Grey's Anatomy and Station 19 crossover left fans reeling after the Shondaland event killed off Seattle Fire's very own Chief Lucas Ripley. Although this was the first major death on the spinoff series, Ripley's demise was a stark reminder of the many casualties of Grey's past, particularly the death of Izzie Steven's patient and fiancé, Denny Duquette, back in Season 2. And while no one really knew about Twitter in 2006, I can only imagine that the fan reactions would be similar to the tweets about Vic on Station 19 — emotional, woeful, and filled with heartbreak.

The parallels between the deaths of Denny and Ripley are almost unreal. Both losses, which occurred in each show's second season, dealt with the death of a patient following a surprise marriage proposal. In the Station 19 and Grey's Anatomy crossover event, a patient arrived at Grey Sloan as a John Doe. And no, it wasn't George O'Malley. It was Ripley, who collapsed while purchasing flowers for Victoria Hughes (Vic). To add even more fuel to the fire, Vic asked Ripley to marry her the night before and he was on his way to tell her his answer.

At Grey Sloan, Maggie Pierce diagnosed Ripley with a serious heart condition — ring any bells, Grey's fans? Then following a series of tests, Maggie also revealed that Ripley was exposed to deadly toxins from a fire and he needed to rest and be treated ASAP. However, Ripley, who was desperate to find Vic, left the hospital. He ended up in a different hospital, but by then, it was too late. The damage was done and Ripley signed a DNR, which meant he was going to die. Following an emotional farewell, Maggie pronounced Ripley dead, and Vic walked out of the hospital into the arms of her Seattle Fire family. And someone find me a supply closet to scream into, because I am broken.

As a longtime fan of Shondaland shows, I know the drill. When someone major dies, there's only one person to blame — the mastermind herself, Shonda Rhimes. Sure, she carefully crafted the world and characters we fell in love with, but that also means that she's responsible for taking them away, right?

So naturally, when the crossover took away Vic's lover, the Station 19 family came after Rhimes on social media:

That being said, not all fans blamed Rhimes for Ripley's death on Station 19. Most were shocked and heartbroken over the Chief and his tearful farewell with Vic at the end of the episode.

But what hit fans the most was the fact that Ripley and Vic won't get their happily ever after. Because let's be honest, if any couple deserves to be happy on Station 19, it's these two.

Now, all fans can do is helplessly watch as Vic tries to heal. In an interview with TV Guide, Barrett Doss, who plays Vic, revealed what's next for her character:

I think of Victoria as a person who's really self sufficient. Opening herself up to love and opening herself up to a risky relationship that she wasn't quite sure about until recently, I think it's going to have a really profound impact on her. I think she's going to have to rely on other people to help her get through this and that's not something she's used to doing. She's very loyal herself. She would be there for anybody on her team, but I don't think she wants anybody to be there for her. I think there will be a process of certainly the grieving process, which will involve a lot of pushing away, and hopefully we see the team rally around her like they did in that last moment of the episode.

The death of a beloved character is never easy. But whatever happens in the upcoming episodes, I know that the Station 19 fam will rally behind Vic and hopefully, she'll heal with time.