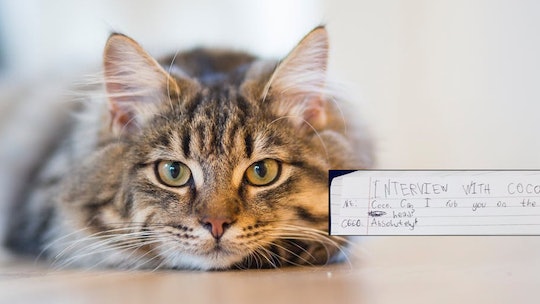 So here's the thing about the internet; cats literally always win. They win against President Donald Trump, against the Kardashian sisters and their fabled pregnancies. They just win at everything, because they know how to play the game, you know? Cats have two speeds: desperately affectionate or emotionally unavailable. It's why we can't get enough of them. Just regular pictures of cats being cats is usually enough to shut down an entire office for an hour or two, but Twitter is honestly losing it over this 10-year-old kid's "interview" with her cat.

It seems young Gabi Duane from Dublin, Ireland decided to she was going to get to really know her cat, the elusive and mysterious Coco. In particular, Gabi very thoughtfully was hoping to make sure she wasn't petting Coco anywhere the cat preferred not to be touched. So she set about "interviewing" Coco with questions about her petting needs, listing the cat's body parts to find out where she preferred to be pet.

According to Gabi's dad, Paul Duane, his daughter got the idea from the internet (where else?). Duane, who is a TV writer and director, told Mashable, "Gabi saw diagrams online people had drawn of where their cats like to be petted and where they don't like it."

Rather than going the diagram route, Gabi decided an interview with her cat would be just the thing. I don't know about you, but I can picture said interview as though it was a scene in the movie. I hope they were curled up on the couch together, I truly do.

Duane shared the handwritten interview on Twitter, and now it looks like Coco has been outed as something of a drama queen.

Coco starts off alright; she makes it clear that petting the head and the back are permissible. But things go south for Gabi quickly. When she asks Coco in the imagined interview if she likes to be pet on the tummy, the cat replied:

How about those legs of yours, Coco?

Coco says no to the tail, and when Gabi really goes for broke and asks permission to pet Coco's butt... it doesn't end well.

IS THERE SOMETHING WRONG WITH YOU?!?! THIS INTERVIEW IS OVER!!!

For reference purrposes (get it?), Duane included a picture of Coco, looking none too pleased with the attention.

As Refinery 29 pointed out, there's actually a pretty important "hidden" message within Gabi's interview with her feline friend: "the fact that she asked for consent and then honored it," the outlet noted.

In addition to the fact that cats and kids basically run the internet, this subtle message could be why Gabi and Coco's epic interview has gone massively viral. In fact, it has been retweeted more than 41,000 times and has nearly 121,000 likes. People were mightily impressed by Gabi's precocious sense of comedic timing.

Since Gabi's interview with Coco went viral, her story has been shared by several news outlets. Her father has been interviewed on her behalf, meaning Gabi is becoming the best kind of famous: *iznternet* famous. And just how does this clever 10-year-old girl feel about being the darling of the internet this week? Duane wrote on Twitter that he couldn't wait for Gabi to get out of Scouts so he could tell her she had gone viral. Her response?

A perfect response for a girl who is reportedly a massive fan of J.K. Rowling, who herself is something of a Twitter celebrity, and I sincerely hope she sees Gabi's interview. It feels like something she would approve of mightily.

Duane also told the International Business Times that his daughter was pleased to find out people liked her writing as well as they do:

She is very excited to hear that so many people love her writing. I'm very pleased for her and also very pleased that the responses are 100% positive with no Twitter weirdos or whatever.

Perhaps this is just the sort of encouragement she needs to develop a series of stories based on her interviews with Coco the cat diva. Just a thought.