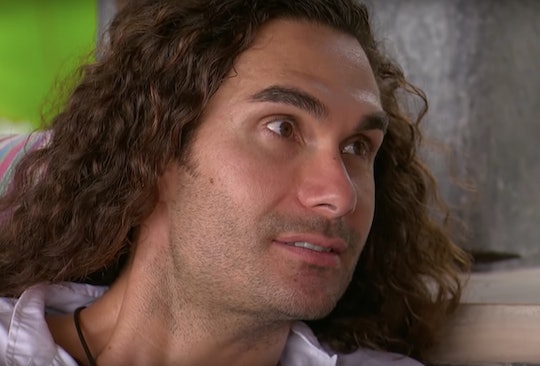 Leo Suffered A Meltdown On 'Bachelor In Paradise'

Despite claims from this summer's crop of Bachelor in Paradise contestants that this season's group is one of the best ever, no one seems to be handling the whole "trading partners back and forth" thing very well. One of several love triangles this season is between Leo the Stuntman, Kendall the Taxidermist, and Chelsea the Single Mom. (Technically, it's a love quadrangle, since Joe the Grocer is also involved.) But in any case, Twitter did not stan Leo's meltdown over the whole thing on Bachelor in Paradise.

When Leo first showed up in paradise, he swiftly threw a wrench into Kendall and Joe's well-oiled machine. At first, their quirks seemed to fit together perfectly. But Kendall soon found herself swept off her feet by Leo's raw sex appeal (and Fabio hair). They went on a romance novel-themed date which was deeply romantic, but when she returned, Kendall was left to process her conflicting feelings with Joe. Meanwhile, Leo jumped straight back into the dating pool and made out with Chelsea after his date with Kendall. Kevin suggested that Leo had a responsibility to tell Kendall he kissed someone else (especially considering she's trying to choose between two guys), but Leo seems to be under the impression that "everybody's kissing everybody out here." He thinks he's entitled to do the same. But when Kendall called him out for his behavior, he did not take it well, to put it mildly. And Twitter noticed.

Eventually, Kevin told Kendall what went down, which prompted her to march straight over and ask Leo what was going on. She admitted that they had a strong connection but was put off by his dishonesty. Kendall appeared to be questioning their whole dynamic.

"Kissing is a handshake in paradise," Leo later said in a confessional, and went on a mission to find out who "snitched" on him. It wasn't exactly the most sensitive tack and he went on a little bit of a rampage trying to find his "rat." Kevin freely gave himself up but it devolved into a screaming match, apparently over the fact that Leo believes kissing is not any kind of betrayal in Paradise. Does a concern for Kendall's feelings seem suspiciously absent from this conversation? That's because it was. Leo was way more upset that he had been ratted out than he was over Kendall feeling hurt or betrayed. He believed he had a right to tell her about the kiss "on his own terms" and not when Kevin thought it was time.

Ultimately, of course, it doesn't matter what anyone but Kendall thinks about Leo's actions. And Kendall was upset! It's true that Leo had a right to go to her about the kiss on his own timeline, but the point either way is it left Kendall unhappy. When they sat down together at the end of the night to talk it out, Leo weirdly gaslit her, both accusing Kendall of "faking" their chemistry on the date, and saying that she was amazing.

He told her that he couldn't understand how she was still single and called Arie "an idiot" for not picking her — but at the same time called her "a phenomenal actress" for her apparently put-on emotions on their date. The exchange was clearly hurtful but Kendall called out his manipulations every step of the way. She held him accountable in ways we rarely see on the Bachelor franchise and it definitely left a mark — on next week's episode, Leo lashes out at Joe on his way out of Paradise.