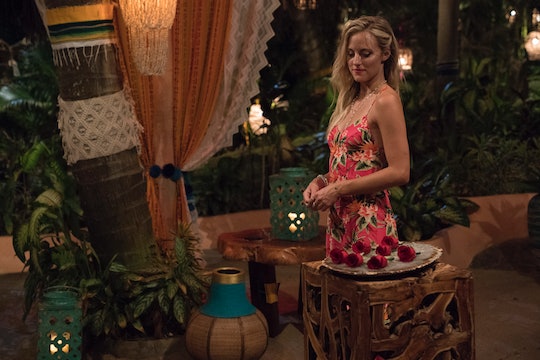 Kendall Has A Big Decision To Make On ‘Bachelor In Paradise’

When she returned from her all-day date with Leo, she was respectful of Joe’s feelings, but she also made it clear to him that she was interested in Leo as well. Since this is BiP after all, she has every right to explore her feelings with any of the men — but it was still hard for some viewers to see their beloved Joe looking so down.

However, there is some hope for all the Grocery Store Joe stans out their. This is Paradise, so minds can change and new people can show up to shift the dynamic in big ways, but judging by the promos alone, it seems like Kendall picks Joe on BiP and Leo doesn't take it very well.

In the promos for upcoming episodes, Leo tells Kendall, "Good luck with Grocery Store B-tch over there." So clearly Kendall, at the very least, isn't putting all of her proverbial eggs in Leo's proverbial basket, and Joe still has a chance. (I’ll try to ignore how absolutely crushed Joe looked in this promo.) But it also looks like shortly after this comment the two men might actually come to blows. Yikes.

Obviously, I hope that Kendall sees Leo's comments as childish and toxic and that she chooses Joe in the end. Only time will tell, but I have faith.

In the short time Leo has been on BiP so far this season, he’s pursued Kendall, but he's also been open about wanting to "get to know" and also smooch, lots of ladies. As long as the other women are also interested, Leo is entitled to kiss whomever he wants, but seeing as how Kendall is putting her connection with Joe on the line for him, it's not the best look.

When Joe recently spoke to Access Hollywood, he admitted that above all the other women on BiP, Kendall was the first one to catch his eye, even though apparently, she isn’t the usual kind of woman he’s interested in. He said that his usual "type" is "more of a Chicago brunette" and that "Kendall is the opposite." Clearly, none of that mattered, since it seemed like Joe was ready to ride off into the Paradise sunset with Kendall from the start, so that has to mean something, right?

In the end, Kendall has to do whatever will make her the happiest — even if that means letting Joe go. It can't be easy to unexpectedly find yourself in a love triangle especially when you’re all stuck in the same resort with no escape to reality really. Right now, to me at least, it looks like Kendall doesn't choose Leo, especially after the upcoming blowout between him and Joe. Now I'm just hoping I'm right.