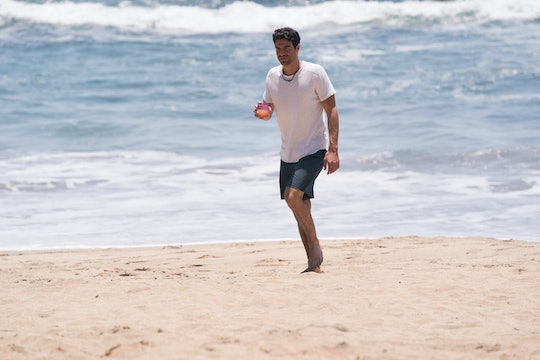 From the very beginning of Season 5, Joe and Kendall seemed like a sure thing on Bachelor in Paradise. For the time being, it seemed like nothing could really come between them. And then Leo arrived in Paradise in Tuesday's episode and things changed. Now, Twitter is worried that Kendall will break Joe's heart on Bachelor in Paradise. Regardless of whether or not Kendall's connection with Leo is real, I don't think anyone is really happy about the possibility of Kendall hurting Joe in any way.

Any time an established couple on BiP is threatened by a newcomer, it can get messy. Case in point: when Leo showed up with his flowing locks and eyes set on Kendall, Twitter was immediately protective of Joe. His time on The Bachelorette was cut short and this was his chance to actually get a chance at finding love. It seemed like Kendall was the one for him, but then Leo showed up in Paradise and whisked her off on a date.

Could this be the end of Joe and Kendall for good? Even if Kendall chooses Joe over Leo, there's still the chance that the whole situation broke his heart a little bit.

It had to have been hard for Joe to watch Kendall walk away for her date with Leo. When she came back in the evening, it was probably even harder for him to hear that Kendall kissed Leo and that she has a lot in common with him.

I never thought that I could be so crushed by a BiP contestant looking so sad. And seeing Joe look so heartbroken after telling the camera that he wished Kendall could see a future with him was kind of devastating. Kendall has every right to want to explore all of her options in Paradise, but fans are not happy about the possibility of Joe getting hurt.

Later in the episode, Kendall said that her date with Leo made her realize that Joe might not actually be the right guy for her. "I just didn't know it was gonna be this hard," she said through tears. "Deep down, I just know — Leo is the right guy for me."

On Kendall's part, it seems like she just wants to figure out her own feelings before things get too far. But Joe seems like he's already falling for her hard. So if Kendall does end things with Bachelor Nation's sweetheart, it's going to be hard to watch.

Of course it didn't help matters when Leo turned around and decided to flirt with literally every other eligible woman on BiP. In his own words, he told Chelsea that he and Kendall established that they're allowed to see other people as well as each other. But in choosing Leo, Kendall would be throwing away all she's built with Joe so far, so it would be kind of a big deal.

Ever since Joe was sent home on night one on The Bachelorette last season, fans have rallied for him. He gained more popularity than some of the other guys who made it to the end of the season. Naturally, the same fans who fell for Joe on The Bachelorette are not happy that Kendall could break his heart on BiP and cause him to go home early once again.

Both Kendall and Joe deserve to find love on BIP this season, but is it so much to ask that they find love with each other over anyone else?