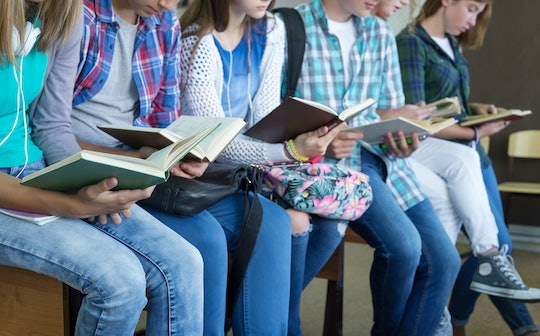 When I was growing up, sexism was a quiet, insidious part of every day life. A hum under all of the regular words people said, a dog whistle of subtext behind so many of my daily interactions. At home, with friends, and even at school. I like to look at the massive change of the #MeToo generation and believe that this has changed, that women have gone around and collected up all the dog whistles. But it seems there are still one or two floating around. Fortunately, Twitter is not having this sexist quote on the wall of a middle school. Because these kinds of seemingly innocent acts of sexism can pack in years of unconscious harm.

Outraged Twitter user Lisa Beckman took to the social media platform on Friday to share a pretty upsetting sight. It seems that Gregory-Lincoln Education Center in Houston, Texas reportedly has a message written on the wall above a group of lockers. A bit of advice for some young ladies, if you will. The quote reads "The more you act like a lady, the more he'll act like a gentleman." That's right, folks. In 2018, this is an actual thing that a middle school has on their wall for young girls to read and process on their own.

Romper has reached out to Gregory-Lincoln Education Center for comment and is awaiting a reply.

Beckman shared the quote with the caption:

This is the wall at Gregory-Lincoln Middle School in Houston ISD. It's perpetuating horrible gender stereotypes, shaming women, and relinquishing boys of all responsibility. It's sexist, misogynistic, and discriminatory! I'm horrified.

So before I try to unpack all of the wrong things about this quote and all of the ways it boils my blood that young girls have to see this on a daily basis, let's figure out the source of the quote. Because it's pretty unbelievable. According to Fox News, the quote comes from Sydney Biddle Barrows. Also known as the Mayflower Madam, a woman who owned and operated an escort service in New York City.

Beckman told local news outlet KHOU that she reached out to the school principal to remove the sign. A teacher at Gregory-Lincoln who didn't want to be named admitted she was bewildered as to why such a sign would be on the wall of a school in 2018:

To me it meant that girls need to take responsibility, not only for their own actions, but for whatever the boys to us as well and I just didn’t feel like that was an image of the equality and self-determination that, we as a district or myself as a mother, want to portray.

Twitter was fully in agreement. Many people were upset about the unrealistic expectations this sort of message heaps on impressionable young girls. To behave in a "lady-like" fashion in order to somehow earn the respect of boys. Not to mention the fact that this message completely negates the responsibility of young men to behave appropriately and respectfully around young women.

There were also people who felt certain that the picture was photoshopped, but the school has since reached out to KHOU and confirmed that it is, indeed real. The school also released a statement to the media outlet confirming that the quote will be removed from the wall:

The quote does not align with HISD values, and it will be taken down.

I hope young girls will focus on the response to this message more than the message itself. And remember that they are never responsible for anyone else's behavior but their own. Period.

More Like This
Up In The Middle Of The Night? We've Got Instagram Captions For That
16 After-School Snacks For Hangry Kids
George Clooney Really Regrets Having His Twins Learn A Language He Doesn't Speak
Prince William Was Quick To Remind Someone That He Does School Drop-Off Duty Too