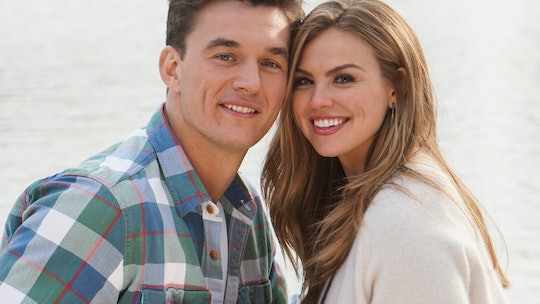 Men Could Learn Something From “Respectful King” Tyler On ‘The Bachelorette'

Here's the thing — respecting your partner isn't a wildly new concept. It's a qualification that meets the bare minimum requirements of being a decent human. But when you have a Bachelorette season circling around a guy who just doesn't get it — ahem, Luke P. — then most people look like a God in comparison. That said, Tyler C. has proven time and time again that he is someone Hannah — and viewers — can trust. And following Hannah and Tyler's overnight date in the Jul. 16 episode, it became overwhelmingly clear that Twitter loves "Respectful King" Tyler on The Bachelorette. Now, if only Luke learned to take a few notes.

When Hannah and Tyler were about to head off to fantasy suites, Hannah revealed that she didn't want to have sex. She expressed concern that their physical relationship outweighed their emotional one and explained that she just wanted to talk during their overnight date. And while the couple's discussion was eye-opening for viewers, it was Tyler's speech about consent and respect that took hold of every heart in Bachelor Nation.

"Tonight — the fantasy suites — it has the connotation of sex," Tyler said in the episode. "For me, it’s way more than that. I just want to be with you and have that time with you. You have to really love and respect and honor each other’s boundaries. I would never press you or pressure you at all. I want you to be 100 percent comfortable and confident in whatever we do together."

After the fantasy suite date, Hannah opened up about Tyler in a confessional and shared that he "was the most respectful man that's ever been with me. Ever."

Like clockwork, fans rushed to Twitter to express their love for Tyler. I mean, Hannah essentially confirmed that he is the perfect man. But to be honest, did you expect anything less? Thus far, this Tyler's responses have been exactly what every man should aspire to be.

Nonetheless, it was interesting to see Tyler's actions so starkly contrast Luke's — and it was all within the same episode. During the dinner portion of their date, Luke and Hannah got into an explosive argument about sex. Luke stated that he expected his future wife to abstain from sex until marriage and said he would leave if he found out she slept with anyone on the show.

Luckily, Hannah was having none of it. She stood up to Luke and his sex-shaming ways, and eventually, Hannah asked him to leave. But, as expected, Luke didn't leave.

"I feel like you owe me at least a minute to share my heart," he said. Nope.

"I don't owe you anything at this point," Hannah responded. "Do you not understand that?"

Finally — after Luke's multiple attempts to get the last word in — Hannah got him to leave. Clearly, this is a man who — unlike Tyler — doesn't understand the word "no." And boy, did Twitter notice.

Whether it was intentional or not, Hannah's season of The Bachelorette has been filled with life lessons. This year, the ABC reality series has shown fans what red flags and toxic behavior looks like through the actions of Luke. Meanwhile, fans also got to see an open and mature discussion about consent and boundaries with Tyler. And while I still think that respecting your partner is still reaching the bare minimum in real life, it's so great to see someone like Tyler on television.