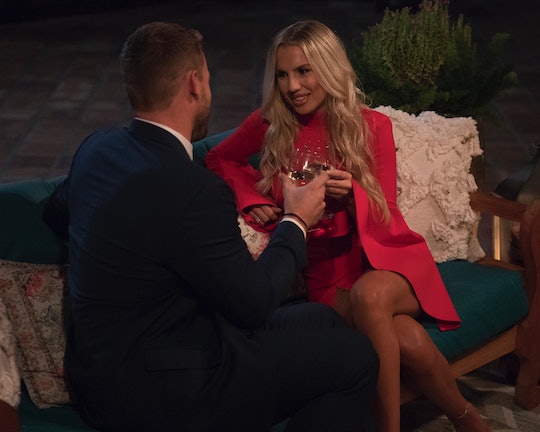 Every Bachelor premiere has a contestant who is unafraid to rub the other women the wrong way and this season, it might be Catherine. She interrupted Colton's conversations with other women not once, but four times in the span of what was probably just an hour or so. And the Twitter reactions to Catherine stealing Colton on The Bachelor show that she might already have some enemies in the mansion.

Every season has someone with the villain edit, so Catherine isn't an anomaly. But as common as her attitude is in at least one contestant, the other women were shocked and put off by Catherine’s attitude. You can't really fault her for wanting to chat up Colton and get in her time to ensure her safety and a rose at the end of the night. After four times, however, even Colton had to be getting tired of Catherine's shtick. The whole "Can I steal you for a sec?" thing is probably worse than contestants accusing each other of being there "for the wrong reasons." If fans on Twitter are already over Catherine's antics, then the women in The Bachelor mansion had to have been feeling the same way.

When one contestant pulled Catherine aside to explain to her why the other women had a problem with Catherine interrupting Colton's conversations, Catherine explained her reasons. And, for all intents and purposes, they were technically the "right" reasons. She said that she wanted to be able to get in enough time with Colton before the end of the night and the first rose ceremony. I'm sure that's how everyone else was feeling too, though, so maybe she could have eased up a bit on the interruptions.

After Catherine's conversation with the other contestant, she seemed like she understood why her actions were being perceived as selfish and rude. Then, of course, she did it again. It's safe to say that Catherine might be this season's villain and Twitter agrees.

Although Catherine didn't make the best first impression on the other women by interrupting some of their conversations with Colton, he said himself during the live premiere event that he didn't mind her assertiveness. Again, that's usually the stance the Bachelor takes and like the Bachelors before him, Colton said he appreciated that she knew what she wanted and tried to get in her time with him. While Catherine isn't supposed to be here to make friends, it does help if you can at least be cordial with them. Continuously interrupting their conversations with Colton isn't the best way to make allies.

Catherine does have villain written all over her already, so it won't be totally surprising if she keeps up her behavior this season. It does have to be tricky during that first night to be able to get in enough time to make a lasting impression to be able to stick around for another week. To be fair, that goes for the other women too, but I can kind of see where Catherine is coming from. Unfortunately, Twitter isn't so forgiving.

Despite some of the women not getting their time in with Colton, he only had to nix a handful of them at the end of the season premiere. Before the rose ceremony, Caelynn blamed Catherine for preventing other women from getting their time with Colton, but at the end of the day, it's up to him to divide his time between the 30 women during the first night. Hopefully Catherine will ease up a bit as the season goes on, but if villains of seasons past have taught us anything, it's that they only continue to play up that image.