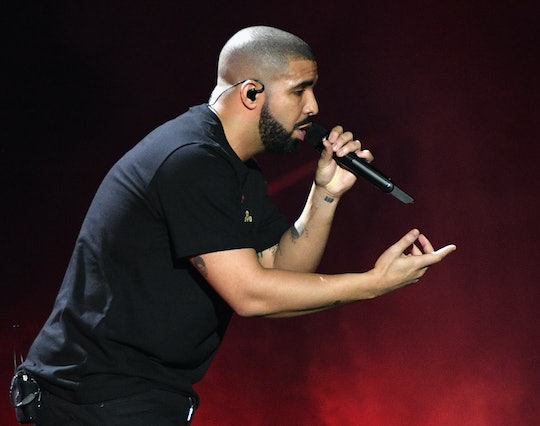 Who needs a music career when you can kill it in a commercial? Taylor Swift cracked everyone up in her Apple Music commercial, lip syncing to Drake while running on a treadmill before doing an epic face plant. At the American Music Awards, Drake did a parody of Swift's "Bad Blood," and Twitter naturally totally loved it.

Fans who were crossing their fingers, hoping against hope that Swift and Drake might be dating could be disappointed. Rumors were swirling around social media that two of the most popular artists in music were going to team up, but as yet that doesn't seem to be the case. The pair have been hanging out and there have been heavy hints that they could collaborate on new music, but a source close to the two told E! News:

They are not dating or hooking up...They are both purely friends.

Still, we can comfort ourselves with Drake's decently hilarious parody of Swift's Apple Music commercial. He was popping and locking like a fool to Swift's famous girl anthem "Bad Blood", lip syncing along while working out. Similar to the original Apple Music commercial that featured Swift falling off a treadmill *on account of how distracted she was by Drake's sick beat, "Jumpman"), Drake struggled with his weights and fell. It was cute, and because Drake can do no wrong in 2016, everyone loved it.

What did people love about the video? Well, other than Drake, of course (although I have to admit, his lip syncing could use some work in this seasoned lip syncer's opinion). Let's ask Twitter, shall we?

To be honest, not every single human being on the planet was on board with Drake's new commercial. I know it seems nearly impossible to believe that anyone could find fault with Drake right now, especially since he is totally the King of the American Music Awards this year with more award nominations than anyone ever, but it turns out some people are skeptics. Whether it was Drake or Taylor Swift or the combination of the two together, who knows?

Some fans (not many but some) have taken to Twitter to call Drake out as a "sell-out" but I feel I need to explain something about him; Drake is a Canadian. We are a polite folk, and we like to make people happy. When Taylor Swift released a video lip syncing to Drake, it would have simply been poor manners not to return the favor.

Also maybe they're in love. Who knows?