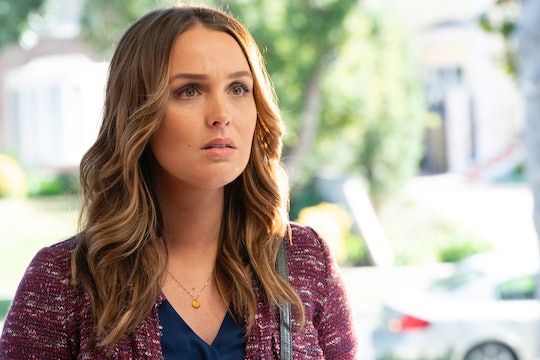 Jo hasn't had an easy life in the Grey’s Anatomy universe. She grew up bouncing from one foster home to the next and eventually lived out of her car before she met a man who would be an abusive husband to her for years. Tonight Jo met her birth mom in an intense and emotional episode and the Twitter reactions to Jo’s reunion with her mom on Grey’s Anatomy show how impactful it was.

She finally got to meet her birth mom, only to find out that she, Jo, was the product of rape, which was probably an unexpected answer about who her father was. It was confusing enough for Jo to meet her mom, who had a career, family, and beautiful home, without Jo in the picture. But now she has to deal with the fallout of knowing who her father was and what he did to her mom before she was born.

Jo’s mom explained that he was a teaching assistant when she was a freshman in college and that even though she told him to stop when things got to far, he kept pushing and told her to tell him that she enjoyed it. When he was done, he promised her that they could do it again any time she wanted and the irrevocable damage was done. Instead of trying to get help, though, Jo’s mom dealt with the burden of her assault on her own and eventually gave birth to Jo. But Jo was the reminder of what had happened to her, even if she couldn’t help it.

Despite Jo being more confrontational than anything during the first part of her reunion with her mom tonight, fans on Twitter are feeling for her and hope that she can move past this.

Some fans who might not have been wild about Jo before have a newfound appreciation for everything she has been through leading up to who she is now. With the revelation about her mom’s past, she is going to have more issues to work through, but Grey’s fans are pulling for her.

You also can't help but see some similarities between Jo and her mom. Her mom’s relationship with Jo’s father was short-lived, but it was still abusive. Jo went on to marry someone who abused her so badly that she moved away and changed her name. The similarities are not lost on fans.

Some fans are worried about the damage this new information might do to Jo, especially given how far she has come. She is finally in a healthy place in life with her career and with Alex, so it’s sad to think that this could damage her in a way that requires more than just a couple of episodes of off-screen "alone time."

One of the hardest things for some fans to watch was when Jo continued to push Alex away in tonight’s episode. He tried to be there for her without even knowing what it is that she’s going through, but she explained that she just needs to be by herself right now. It’s understandable on her end, but it’s still so heartbreaking to see her unable to accept his help while he watches her, powerless.

Jo might not be the person who was sexually assaulted, but her mother’s assault led to her being conceived and that is enough to make anyone question everything about themselves. Jo probably has a long road ahead of her as she tries to understand where she comes from and who she is, but she has already proven herself to be strong enough to get through anything.