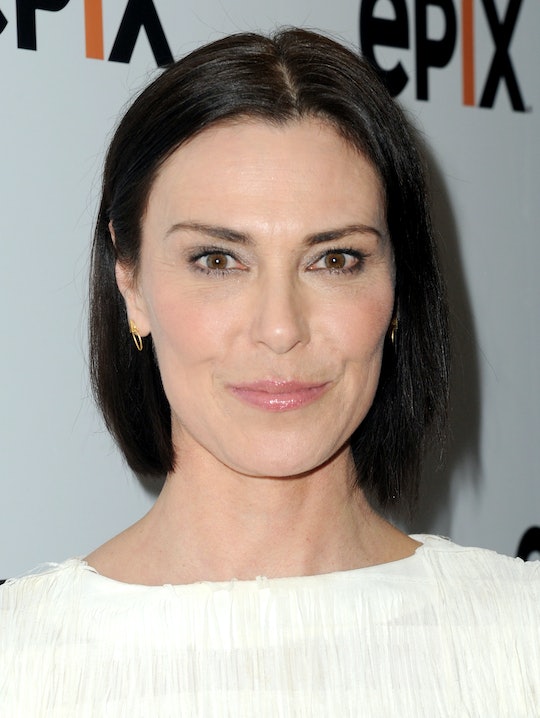 Last week on Grey’s Anatomy, Jo made the bold decision to search for her birth mother and at the end of the episode, an intern had already done all of the internet legwork for her. He showed her a picture of her mom online and said that her name is Vicky. It didn't give Jo much to work with initially, but the photo was familiar to some fans who may have seen the actress who plays Jo’s mom on Grey’s Anatomy somewhere else. Michelle Forbes has actually been in a ton of TV shows over the years and across a lot of different genres, so you probably rightly recognized her from some other show you obsess over.

Most fans probably recognize Forbes as Lieutenant Ro Laren from Star Trek: The Next Generation, but she has also been in 24, Battlestar Galactica, Prison Break, True Blood, and Chicago Fire, just to name a few of her more notable credits. Most recently, Forbes was cast as Valerie in Berlin Station and now she is making her Grey’s debut as Jo’s mom. Although there’s still no word yet on when she will show up or if Jo will find her before the season finale is here, something tells me Forbes will be playing a multi-layered character to throw Jo for a loop. And judging by Forbes’ expansive career, I’m sure she is up for the task.

Forbes has a more recognizable face than name, so it might surprise some fans to know that she has 11 award nominations under her belt, including Primetime and Daytime Emmys. When she isn't taking on roles and crushing them in almost every genre, she seems to enjoy traveling and spending time with her dog, Henry.

Forbes’ Instagram has a lot of photos of Henry and others of Forbes with her friends and co-stars. She also posts pictures of different paintings and artwork she has purchased over the years. Mostly, though, she seems all about doting on her overly fluffy and adorable dog, who she takes in restaurants and on set with her, and that’s kind of awesome.

In January, TVLine reported that Forbes had been cast in an unknown role but it was speculated that she would play Jo’s estranged mom. So far, all viewers know about Jo’s mom is that she left Jo at a fire station when she was two weeks old and that afterward, Jo bounced around between foster homes and had never met her or any other blood relative. Jo’s mom wasn't even shown on Grey’s Anatomy until last week’s episode when Jo saw her photo online.

Camilla Luddington, who plays Jo, teased to TVLine back in September that Jo’s parents would pop up sometime this season. "I have heard that there is a strong possibility that will happen this season, which is really exciting," she said at the time. "I don't know the context of how they’ll end up running into each other, but that’s a huge deal for her."

Needless to say, Forbes has some important shoes to fill, but I don’t think she will have a hard time playing such an important character. As a self-described "commitment-phobe," I don't think Forbes will have a permanent role on Grey’s Anatomy, but she did tell Indiewire that she is more open to longer TV roles today than she used to be.

"I think it used to be that people wanted to own you and I think now everybody understands that it’s better for everybody if you’re on two successful shows," Forbes said, of being able to take on more than one role at once without being tied down to one project. "You know what I mean? You kind of feed off each other. I think thinking more like a community is better for everybody." She added, "I've always been so scared of being pigeon-holed, and I constantly kick against that."

Forbes' career has been consistent over the past almost 30 years and although she is in more of a long-term role on Berlin Station, she will likely continue to pop up everywhere else. Now, that includes Grey’s Anatomy too.