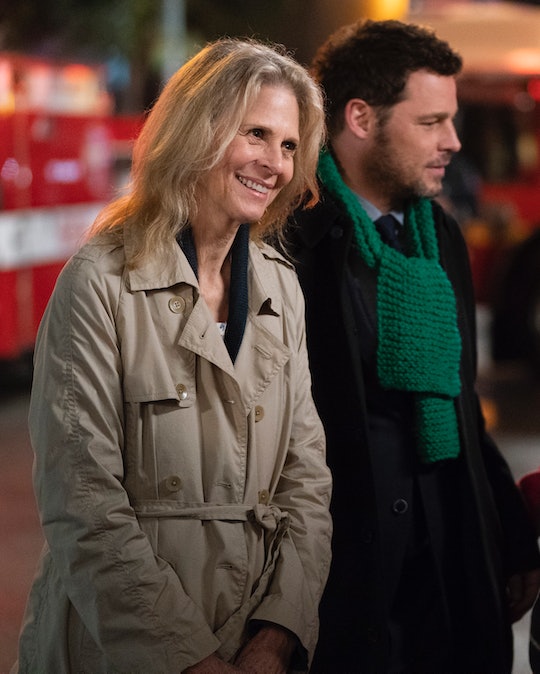 Like Jo, Alex had something of a traumatic childhood on Grey's Anatomy. It may have been part of the reason he started off as the show's resident cocky intern, but over the years he's grown up a lot and he has even started to rebuild his relationship with his mom. But now that she's been here for a while, viewers are probably wondering who plays Alex Karev's mom on Grey's Anatomy. Lindsay Wagner has been all over TV in the past few decades and although her role on Grey's Anatomy is important, she probably won't be staying on permanently.

Judging by Wagner's IMDB, she keeps busy with new roles across different genres all the time. One of her most memorable to date, however, is probably the role she landed as the title character in The Bionic Woman and then in The Return of the Six Million Dollar Man and the Bionic Woman in 1987. In fact, she guest starred in a recent Charlie's Angels-inspired episode of Fuller House with her former The Six Million Dollar Man co-star Lee Majors.

When she isn't taking on guest starring roles in TV shows or starring in TV movies, Wagner is big on charitable causes that are close to her heart. In 2016, she was the keynote speaker at the Empower Comic Con, a convention dedicated to empowering women, in Topeka, Kansas. That same weekend, she was in Topeka to help with the charity, Connie's closet, which helped sixth grade girls in need get clothing and guidance. Wagner was probably the perfect actress to pull off the role of Alex's mom on Grey's Anatomy, given her range, but there is more to her than decades of acting under her belt.

Although her schedule might be a little busy with her TV roles these days, in 2013, Wagner became an adjunct faculty member at San Bernardino Valley College in southern California in the Acting and Directing for Television and Film, Motion Picture Production department. It's unclear if Wagner still teaches part-time, but it would be kind of amazing to have *the* Bionic Woman teach you about acting.

Outside of show business, Wagner has had other success. In 1987, she co-wrote the book Lindsay Wagner's New Beauty: The Acupressure Facelift and then in 1994, she wrote her own vegetarian cookbook. She has also given workshops on her spiritual meditation practices called "Quiet the Mind and Open the Heart." At this rate, there's basically nothing she can't do or hasn't already dipped her toes in. Wagner is really living up to that Bionic Woman title, even now.

Although Wagner has remained in the public eye in one form or another over the past several years, People magazine referred to her recent surge in roles as a Hollywood comeback and she welcomed the phrase.

"I'm kind of being guided to come back," she told the magazine. "The heart wants what the heart wants, as they say."

When she took on her career-changing role as the Bionic Woman, it was a clear turning point for seeing stronger woman in important roles on TV and since then, she has fully embraced her icon status.

It's hard to say how many more Grey's Anatomy episodes Wagner will be in this season, but she has already killed it as Alex's mom and she has a few other projects in the works. She was in the 2018 Hallmark Christmas movie Mingle All the Way, so I wouldn't count her out for more classic Hallmark movies in the future. And up next, Wagner will lend her voice to the horror action video game Death Stranding, which will also feature The Walking Dead's Norman Reedus. Like I said, there's almost nothing Wagner can't do.