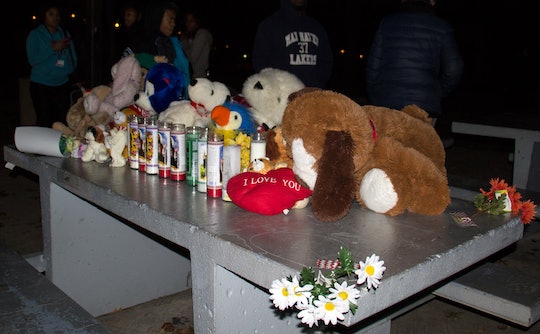 On Monday, prosecutor Tim McGinty announced that an Ohio Grand Jury would not be issuing an indictment in the tragic 2014 police shooting of 12-year-old Tamir Rice. Tamir Rice was shot by a Cleveland police officer while he was playing with an airsoft toy gun in a park, and succumbed to his massive injuries a day later (arguably because Tamir didn't receive first aid for 4 minutes after being shot). McGinty went on to explain that because the young boy was holding a pellet gun at the time he was shot, it was deemed "reasonable" that the police officer would consider himself in danger, and shoot the boy in self-defense. Twitter reactions to the Tamir Rice ruling are coming in fast and furious... Or rather, fast and completely, utterly exhausted. Many are regarding McGinty's "explanation" as victim-blaming, essentially holding Tamir responsible for his own death.

On Nov. 22nd, 2014, Officers Timothy Loehmann and Frank Garmback responded to a 911 call that there was a "guy with a gun," the witness also stating that the gun was "probably a fake." Shocking and difficult footage of the shooting (which I won't link to) shows the two police officers driving up on the scene and, within seconds, Officer Loehmann shooting the boy.

The incident added to an already tense, if not broken relationship between the black community and local law enforcements that has left people feeling defeated, tired, and sadly, not too surprised that these horrific situations are continuing. Now that the Grand Jury has decided not to indict the officer that killed Tamir, a little boy playing with a toy gun, it is once again painfully clear that people are exhausted from all of it. People are no longer as enraged as they once were, or as surprised as they once were, but sadly, simply fed up, emotionally fatigued, and ready to be done with the world we've apparently decided it's acceptable to live in.

Feelings of hopelessness, loss and disgusting inevitability were shared by twitter users around the country, making one thing obvious: the country has had enough of black people (and children) being killed without consequences, and beyond that, the country is tired of having enough.