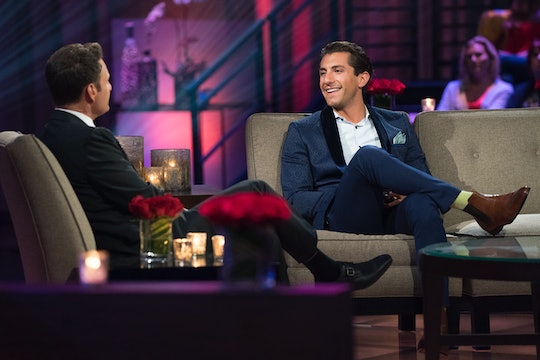 Jason Is A Fan-Favorite For 'The Bachelor'

Most Bachelorette fans already loved Jason Tartick this season, but when he appeared on "Men Tell All" Monday night, that pretty much sealed the deal. We all know that Becca Kufrin sent him home through tears all around, and after seeing him talk about their relationship, it's clear that his feelings for her were real. Now, Twitter wants Jason for The Bachelor and at this point, he could be the best possible choice.

More Like This
Everything You Need To Know About The Proud Family Reboot Coming To Disney+
Lisa Kudrow’s Son Used To Say "Mommy!" When He Saw Jennifer Aniston On TV
Everything There Is To Know About The Friends Reunion
The Great-Granddaughter Of Alice In Wonderland Is Getting Her Own Show

Throughout the course of the season, he seemed totally genuine anytime he spoke to Becca about his feelings for her. When they made it to hometown dates, it was even clearer that his feelings for her were real and fast approaching love. So much so that it was surprising that he didn't make it to the final two, especially since Becca was developing strong feelings for him too. But it was part of that genuine personality and Jason's openness that made fans root for him and continue to root for him now.

On "Men Tell All," Jason made an important statement about love being for everyone, regardless of who who are or who you love. And while it wasn't exactly groundbreaking because it should be a given at this point, it was a big deal to be said on a Bachelor franchise show. Jason is just the gift that keeps on giving and fans on Twitter are ready for him to be announced as the Bachelor any day now.

There may be some other strong contenders for the role of the next Bachelor, but Jason is the most logical option. If the next Bachelor should be kind-hearted, down to earth, and open to love, then Jason is meant for the role. It also helped that his interview with Chris Harrison on "Men Tell All" seemed like a classic pre-Bachelor announcement interview.

Jason hasn't been announced as the next Bachelor just yet and neither has anyone else, but he is open to the idea. "Coming into The Bachelorette, I always led with a calculated mind and not an open heart," he told People. "Now, I’m able to start leading with my heart and not my head. And I’m in the best position to find who I’m looking for now."

Jason isn't the only guy this season who was there for the right reasons, but of the handful that really fell for Becca, he was one of the more heavily impacted by their breakup during their fantasy suite date. It was heartbreaking to watch and some fans think that because of that heartbreak, he needs to be given a shot at finding love on The Bachelor next.

I'd be lying if I said I wasn't also rooting for Grocery Store Joe because he's Grocery Store Joe and basically America's sweetheart. Jason is also a solid choice though, especially since he was so genuine all season long, even when some of the other guys might have gotten under his skin. How could we deny him the honor of being on The Bachelor?

By the time Jason left The Bachelorette this season, it was likely too late to be sent to Bachelor in Paradise, but the guy still has so much love to give. If he isn't announced as the next Bachelor when the time comes, then there are going to be a ton of angry Bachelor fans ready to riot. Or, you know, angrily tweet out their frustrations with ABC.

Jason is all for The Bachelor and fans clearly want it, so the only thing left to do now is hope that it works out for him. If not now, then hopefully this still isn't the last we've seen of him.