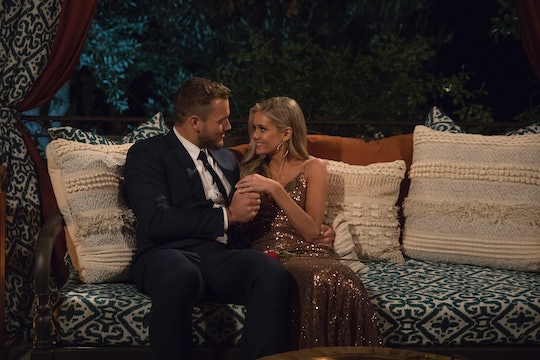 Colton has finally made it to hometowns week and although he has more than one southern contestant still in the mix at this point, only one of them made him take a traditional southern etiquette class before meeting her family. The whole thing was super bizarre, and obviously, Twitter jumped at the chance to start making memes about The Bachelor's etiquette date.

Upon arriving in Birmingham, Alabama, Hannah G. gleefully announced that they do things a little bit ~differently~ in the south, so she took Colton to an etiquette expert. Needless to say, Colton appeared less than excited by the prospect of being turned into her "perfect southern gentleman," and his hilariously freaked out expression prompted tons of parallel reaction gifs. (All the classics came out! Caucasian man blinking dot gif! Michael Scott! Jim Halpert! Andy Dwyer!)

Colton's reluctance turned out to be warranted when the etiquette expert simpered, "I'm sure that you have fabulous manners, but here in the South, we may do things a little more traditionally than you're used to." Which like, Colton is from a football family in Central Illinois. It's unclear how much more traditional he possibly could be. Poor Colton put a brave face on for Hannah and he really did give the date a solid effort, despite the expert's sort of condescending tone and deliberately tricky questions.

Things didn't start off too badly. Colton nailed the walking-with-a-book-on-his-head task designed to test the confidence of his posture, for instance. Both Hannah G. and the etiquette expert seemed impressed. But then, he had to model proper dinner etiquette, which is where things — and I can't emphasize this enough — went South.

The etiquette expert quizzed Colton on the first thing he should do after he sits down, and he bravely guessed "say grace." The answer we were looking for is "napkin on the lap." Next was a test to see if Colton could serve bread out of a basket, which he failed, because he put Hannah's roll on her plate with his hands, instead of letting her pick it up herself. (A bad call, in my opinion, since the table didn't have bread tongs, which any reasonable person would have used had they been there!)

Colton also tried to slice his roll in half and butter it, which prompted the expert to ruefully remark, "Bless your heart," before explaining the finer points of tearing off tiny bites of bread and buttering them individually. (I actually do support this practice, only because you get more buttery bites.)

"Who has time to nibble off a bite of bread?!" Colton understandably exclaimed in a cutaway interview.

The whole thing culminated in a truly regressive analogy about how Hannah's parents had been holding an umbrella over their daughter for her whole life and, now, they were seeking a man to pass that umbrella off to. It was... more traditional than most of Bachelor Nation following along on Twitter was used to, to say the least. After all that, the etiquette expert simply encouraged Colton to be himself, and he did wind up nailing the family visit. But it was easily one of the least fun-seeming dates of the season.