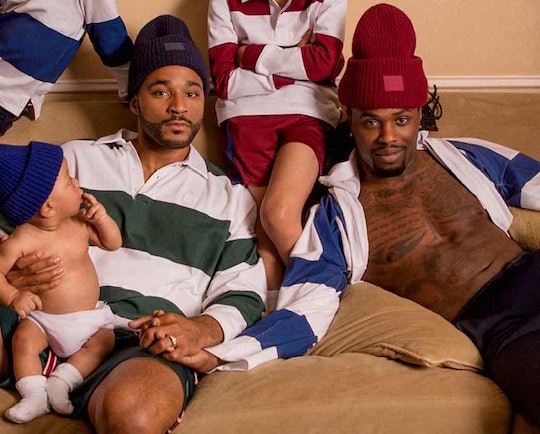 It all started with a regular morning routine, two parents fixing their daughters' hair in the bathroom before the day began. These parents happened to be two men, who also happened to be men of color. The photo they shared went viral, and the pair became internet famous. Now these gay dads and their kids have a fashion campaign, and it's a pretty big deal. Because this family is now the first black LGBT family to represent a major fashion brand.

Kordale Lewis and Kaleb Anthony of Atlanta have signed on with Swedish fashion label Acne Studios and already completed a photo shoot for the Fall/Winter 2017 line. All six family members (daughters Desmiray and Maliyah and sons Kordale Junior and Kaleb Junior) wore coordinated striped rugby shirts and hats in a hotel room in New York, jumping on the bed and clearly having a great time. The family felt like a natural fit to the Swedish fashion label, according to creative director Jonny Johansson's press release on the Acne Studios website, because:

It is also a way of highlighting that while every family is different, we all have the same love and want the best for our children. There is no ‘normal’ family—all families are normal.

Lewis and Anthony, who have been together for six years, initially rose to Instagram stardom in 2014, when they shared a picture of themselves getting their daughters ready for school with the caption:

Being fathers is getting our daughters up at 5:30 am making breakfast getting them dressed for school and putting them on the bus by 6:30 .This is a typical day in our household . It's not easy but we enjoy every moment and every minute of #fatherhood #proudfathers #blackfathers #prouddads #gaydads

While the post initially received serious backlash on social media, the pair withstood the onslaught and managed to come out on top. The post was liked more than 53,000 times and has since earned the family over 170,000 followers on Instagram. The couple spoke to HuffPost Gay Voices at the time, saying:

As far as the positive; yes we are two gay men with three kids who have no problem with preparing them for their education every morning; that comes with anything and everything they may need for school! Our kids are blessed to have three parents (Kordale, Kaleb and their Mother) who love, care and support them in every decision they have made and will continue to make as they get older. We are blessed to have the ability to provide for them in ways that a lot of people cannot for their family, which ultimately makes us happy knowing that they don't want for much! Our main objective as parents is to provide, love, educate, support, encourage, and love some more!

Since then, Lewis and Anthony went on to make a Nikon commercial with their kids in 2015.

And now, of course, the new gig with a Swedish fashion line. Neither Lewis nor Anthony are professional models, nor are their children. They are simply a modern family, and Lewis explained to Mic that that was exactly why Acne Studios felt like a good fit.

The Acne campaign came about in simple divine intervention. Acne hired a scout who reached out to us once the creative director showed interest and his thought of what a modern family is today. When she reached out, we quickly obliged and history was made.