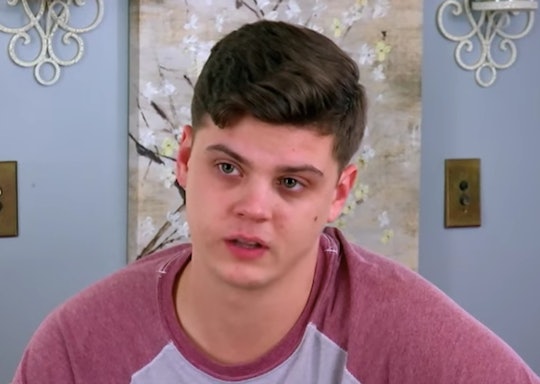 Tyler Baltierra Opens Up About His Mental Health In A Powerful Video, & It's So Important For Dads

Millions of people in the U.S. suffer from with mental illness each year, but despite how common it is, many people still do not feel comfortable sharing their struggles. One Teen Mom star is out to change that. In a recent Instagram post, Tyler Baltierra opened up about his mental health. Along with sharing his own mental state, Baltierra also touched on the importance of talking about mental health and his message is really powerful — especially for dads.

Baltierra shared a video to Instagram on Monday night during which he tearfully told viewers that he is having a "bad day." He explained in the caption for his video that he considered deleting the post, but thought about it more and decided to share with the intent of further opening up a conversation about mental health. "If I can at least connect with one person through this & let them know that they aren’t alone in their struggles. It will make being vulnerable worth it," he wrote.

The National Alliance on Mental Illness reported that approximately one in five adults in the U.S.— which boils down to 43.8 million, or 18.5 percent —experiences some form of mental illness in a given year. Chances are, someone you know struggles with their mental health in one way or another, despite the fact that the norm is to keep quiet about it, according to Psychology Today. It is this silence that keeps many people from feeling comfortable asking for help when they need it. Baltierra is doing his part to change that.

The video shows Baltierra silently crying as he explains his feelings and encourages others to do the same:

Sometimes, you just don’t know what to say to your children. I never cry in front of Nova because I don’t want her to feel any of that. You have good days and then you have bad days, and, uh, today is just a bad day. If you’re in that same boat as me, just hang in there and you’re not alone. Talk to somebody.

And this isn't the first time Baltierra opened up about his mental health publicly. In January, he posted a similar video where he said that he was attending therapy and emphasized the importance of self care:

I made it. I made it to my therapist appointment. Putting in a little self-care today, know what I mean? Sometimes you have to put yourself ahead of some other people sometimes in life. Doesn’t mean you don’t love ’em or care about ’em. It just means you love ’em enough to put yourself first so you can be the best ‘you’ you can be.

Baltierra's followers certainly seem to appreciate his candor. One user shared their story about their own struggles with mental illness and how they relate to his experience:

Your [sic] amazing Tyler and so is Cate keep doing what you do. You show everyone that your [sic] human we see the good days and bad with you not just good and me personally I like that. I have BPD bipolar and anxiety so know how it feels to have bad days and feel alone.

Another praised Baltierra for being "real" about what he is going through:

You are one of the strongest guys I know and the one and only teen dad that has been real thru [sic] it all. I feel your pain and it will get easier. Keep your head up bro.

And Baltierra's openness is especially powerful because he is a father to a child he and Catelynn ultimately put up for adoption. Dads, though they can face postpartum depression just like moms, are often told they need to hide their feelings and stay strong for their spouse or for their family.

Both Baltierra and his wife Catelynn have been proactive about getting help when they need it. Catelynn is currently attending rehab for the third time to combat struggles resulting from childhood trauma, according to People, and she also sought help last year for suicidal thoughts. It is good to know that the two are making their health a priority and getting the help that they need. It is a great example for those in need of similar care.