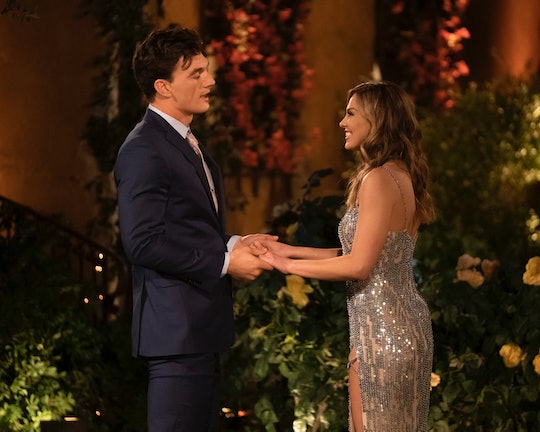 Twitter's Reaction To Tyler C. On 'The Bachelorette' Pregnancy Date Is Priceless

In one of the more entertaining Bachelorette group dates in recent memory, Hannah took a bunch of her guys on a magic school bus ride through labor and delivery — complete with a women's health trivia session, a labor simulator, nipple clamps to mimic breastfeeding pain, and a simulator baby that cried and expelled realistic fluids. Some of the guys fared better than others but Tyler C.'s thoughts on pregnancy really threw Twitter for a loop. Because on the one hand, he's fine, and on the other, "I don't really know too much about pregnancy except that your belly gets bigger and bigger and the woman gets hungrier and hungrier" is...an observation.

Tyler C. valiantly added, "I'm excited to learn what else is going on here," so at least he was open to picking up some more pregnancy facts. When it came to the labor simulator, Hannah was the first person to admit that she was pretty sure the 25-year-old general contractor from Juniper, FL didn't know what was about to happen. He sprawled out in a perfect Instagram model pose, looking more like he was about to do a photoshoot than take an electrical current to his lower abs. As group date guest host Jason Biggs was quick to point out, Tyler C. struggled to keep his head propped up on his massive bicep once the contractions kicked in, and Twitter found his whole vibe very precious.

On the other hand, once his ditzy model moment had passed, Tyler C. actually shared some pretty sweet one-on-one time with Hannah at the cocktail party after the group date.

"Today made me want to call my mama and tell her I love her," Tyler C. told Hannah. "Women really do run this world and they deserve so much respect."

Hannah seemed to find him genuinely adorable and, with some confidence under his belt, Tyler C. kept laying on the charm. He added:

That's one thing I will say about you is that I see this powerful woman and I firmly believe whatever it is that your calling is, you'll move mountains. You're a badass woman and that's one of the biggest turn-ons about you, and I want to be the one that's fueling the fire.

You guys! Tyler C. is actually very sweet! He capped the whole thing off by telling Hannah, "I hope to be the guy cheerleading next to you and supporting you and being your arm candy," a statement she found so endearing she went ahead and kissed him.

In the end, Hannah decided against a cocktail party ahead of the rose ceremony, opting instead for a good old fashioned Bama tailgate. There, Tyler C. took it upon himself to remind Hannah that he was a tight end (with the buns to prove it) and do a little tackle exercise with her. Needless to say, he easily secured a rose at the end of the night, and Twitter could barely contain itself. He may have a long way to go before becoming the perfect pregnancy support partner, but Bachelor Nation definitely has high hopes for him.