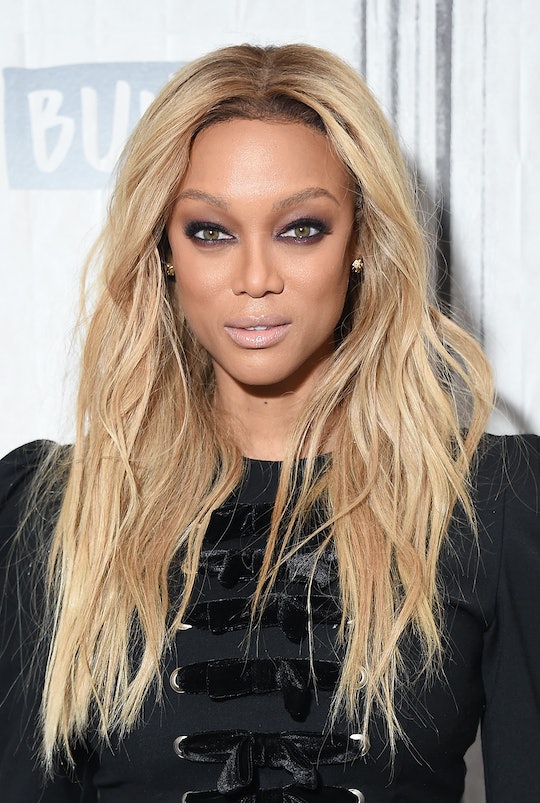 I used to sing French lullabies to my sons. I also used to mutter quiet diatribes about the state of their bedrooms under my breath in French. I thought I was being a truly forward-thinking mom, but it turns out I inadvertently used my knowledge of a second language against the kids. Not such a great parenting move. Not like Tyra Banks, who says her 2-year-old son speaks three languages. Apparently, smizing isn't the only ace this top model has up her sleeve.

In a recent interview with People, America's Got Talent star Banks opened up about her 2-year-old son York and the fact that he is apparently super brilliant. The former Sports Illustrated swimsuit model told the media outlet that her son is miles ahead of the other students at his preschool, whether he's able to identify more colors than his peers or count higher; “My son is amazing with his colors. He has friends in his classes that are like ‘re-re-red’ and my son is already up to silver and rose and rose gold. And he has been counting to 20 since he was 18 months. So he’s really, really smart.”

I mean, I'm not even sure I could differentiate between rose gold and gold if the lighting was bad, so kudos to York.

Beyond being a whiz with colors and counting, Banks also told People that York speaks "Spanish, Norwegian and English."

But before you go worrying that he sounds a little too good to be true... it turns out he's still a toddler. As Banks pointed out in the same interview: "He’s a smart one — but he’s still crazy and damn near rolling on the floor and not listening to me most of the time!”

Whether her son is rolling on the floor not listening or not, the fact that he is on his way to having three languages under his belt is a huge leg up for the little boy. The younger children are when they are exposed to other languages the more likely they are to retain that knowledge, according to Kumon U.K. And being able to speak (and think) in another language can help children in a myriad of ways, creatively, academically, and personally, as Kumon U.K. noted:

Studies suggest that at a cognitive and academic level, children learning an additional language are more creative, better at solving complex problems and usually score higher on standardized tests. Once children know a second language, it is easier for them to understand further languages structures, which is why experts say that every new language learnt is easier than the one before.

On a personal level, children who can speak a different language can converse with many different kinds of people, and will have access to resources and cultures they may not have otherwise have been exposed to.

And York is going to be next-level lucky, because his mom told Seth Meyers during a recent interview that her son already knows about "smizing" (smiling with just your eyes). Which is basically like having a fourth language, really.

Tyra Banks is one smart cookie, of course. She's built a successful, sustainable brand over the years not just by modeling, but by being absolutely true to herself. And it looks like her son is following in his mother's hallowed footsteps. Smart, capable... and one heck of a "smizer." But don't go thinking you'll be seeing too many pictures of the brilliant tyke any time soon; like so many other celebrity parents, Banks has made an active decision to keep her son's life private.

So that one day, when we're all reading about some brilliant Nobel Prize winner who also happens to know how to nail a great smize, we'll all be like... wait, is that Tyra Banks' kid?