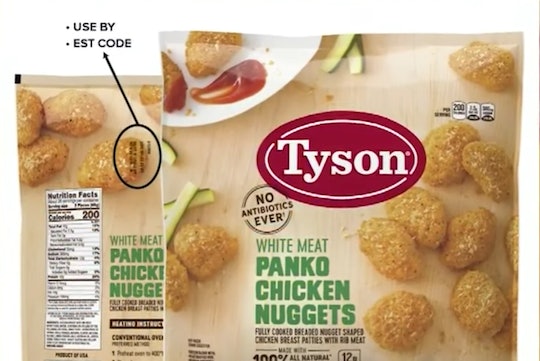 Tyson Has Recalled Over 36,000 Pounds Of These Chicken Nuggets

Parents, you'll want to have a very close look in your refrigerators and freezers as a new recall has been issued on a kids' lunchtime staple: chicken nuggets. On Tuesday, Jan. 29, the U.S. Department of Agriculture (USDA) announced that Tyson Foods has recalled bags of chicken nuggets because they may be contaminated with a foreign matter — specifically rubber.

According to the USDA's news release, Tyson Foods is recalling over 36,000 pounds of frozen chicken nuggets due to a potential rubber contamination. Specifically, 5-pound bags of "Tyson Fully Cooked Panko Chicken Nuggets" that have a "Best If Used By" date of Nov. 26, 2019, according to the USDA's notice, which states that the affected products should not be consumed. Instead, the recalled nuggets should be thrown away or returned to the place of purchase, as CNN reported.

The affected chicken nuggets were sold in multiple club stores in several states, including Arizona, California, Illinois, New Jersey and Utah, according to Tyson Foods.

Romper's request for comment from Tyson Foods was not immediately returned, but the company did issue a statement regarding the voluntary recall on Tuesday:

Consumers who have these bags of recalled chicken nuggets in their freezers are advised to not only throw them away, according to CBS News, but to cut out the UPC and date code from the back of the packaging and send it to Tyson Foods for a full refund. Additionally, those with questions about the recall can call the "special toll-free line at 1-888-747-7611" between 7 a.m. to 6 p.m. CST, Monday through Friday.

Fortunately, no one has gotten sick from the possible contamination, as the company stated, and the USDA said in its notice that there have been no confirmed reports of "adverse reactions." However, if you are concerned about injury or illness, the USDA advises consumers to contact their health care provider.

This isn't the first recall on first chicken nugget issued this week. In fact, Tyson is now the second company to recall chicken nuggets, according to USA Today.

On Monday, Perdue recalled over 16,000 pounds of kids' chicken nuggets because of an "undeclared allergen and an incorrect UPC code," according to USA Today. These chicken nuggets reportedly contain milk, which was not included on the packaging label, as USA Today reported. The Perdue nuggets were sold in stores in 15 different states across the nation.

Recalls involving your kid's favorite foods are always concerning, and possibly finding rubber in your bag of chicken nuggets isn't something to joke about. With these back-to-back recalls, it's best to err on the side of caution and have a very close look at your nugget supply.