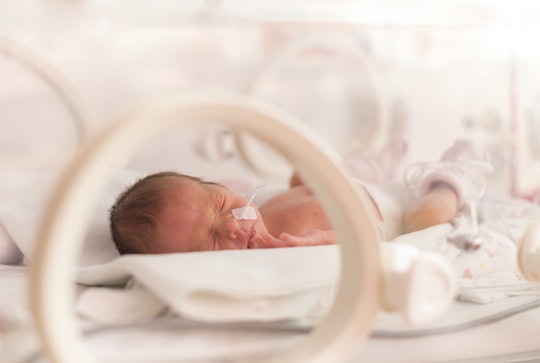 The United States has seen tremendous improvements in medicine and medical technology since the 1950s. Health rates have improved nationwide because of better screening and treatment options. But, despite these advancements, access to neonatal and maternal health care still has a long way to go. Case-in-point: New data shows that underweight births are rising, and all signs point to a failing health care system and other socioeconomic barriers as the reasons why.

The 2018 County Health Rankings report, released by the Robert Wood Johnson Foundation this week, found that the number of infants born underweight has increased since 2013, with the sharpest uptick occurring between 2014 and 2016, according to CNBC. In 2016, low birth weights (meaning less than five pounds) accounted for 8.2 percent of all births in the United States — a 2 percent jump from two years prior, according to the report's findings.

More alarming: Black mothers in all 50 states have been disproportionately impacted by underweight births more than any other racial group, CNBC reported. In Missouri, for example, low weight births among Black mothers hovers around 16 percent, whereas for white mothers, it's about 8 percent, according to the report.

"In terms of low birth weight, we are seeing a trend that it is getting worse across the nation," Julie Willems Van Dijk, director of the RWJF program, County Health Rankings & Roadmaps, told CNBC. "For black mothers and babies, it is particularly troublesome."

A low birth weight can have a negative impact on the short- and long-term health of a child. Studies show that babies born underweight, especially extremely underweight, see higher rates of developmental issues and chronic illness compared to infants born over five pounds, according to the National Institute of Child Health and Human Development. Some of the health problems underweight newborns face include sleep apnea, jaundice, anemia, heart issues, chronic lung disorders, and infections, according to Emory Psychiatry.

There are many factors that can influence an underweight birth. Often, babies with low birth weights are born prematurely, meaning before 37 weeks of gestation. But other causes include certain birth defects, poor nutrition, pregnancy complications, exposure to toxins, and inadequate access to prenatal care, among other factors, according to Boston Children's Hospital.

That last bit — the inadequate access to prenatal care — is a key reason why there is such a disparity in birth weights among racial groups. Research has shown that socioeconomic barriers and community segregation keep mothers of people, especially black women, from receiving high quality medical care, according to CNBC.

A lack of insurance, poor transportation, living below the poverty line, and a dearth in health care clinics can prevent women from receiving adequate prenatal care, according to a 2016 study published in The Saudi Medical Journal. And when a pregnant person doesn't get the proper medical care, then there are more likely to have poor outcomes, such as their babies being born underweight or premature.

There is no reason, though, for this to be the case in 2018. Every person should have access to health care, no questions asked. Prenatal care is vital to guaranteeing that a child and their mother live long, healthy lives. But that can't happen if states aren't investing in ensuring equal access.