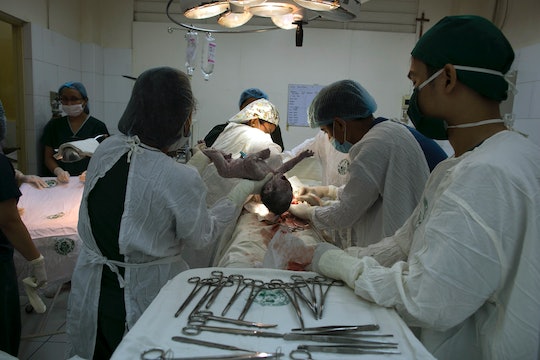 Here's How We Could Stop Moms Dying During Childbirth

According to Centers for Disease Control and Prevention, around 700 women in the United States die each year due to complications related to pregnancy or delivery. It’s a startling statistic, especially when you consider the situation is only getting worse. According to NPR, maternal deaths dangerously rose 26.6 percent from 2000 to 2014. Although all of these numbers are alarming, California recently enacted an initiative to combat maternal deaths during delivery. Given the incredible success of the program, everyone should be paying attention to what California did to stop moms from dying in childbirth.

It’s no secret America’s health care system is lagging in many ways. One of the system’s main pitfalls is how it cares for mothers during delivery. The good news is, California just set an amazing example for other states with its California Maternal Quality Care Collaborative, a health collective based out of Stanford University, according to a feature on the initiative by Vox. According to the Cmqcc.org, they’re a “multi-stakeholder organization committed to ending preventable morbidity, mortality and racial disparities in California maternity care.”

Founded in 2006 due to concerns over the increasing maternal mortality rate, the CMQCC used the latest research to create "evidence-based toolkits" to solve problems related to "Early Elective Delivery, Hemorrhage, Preeclampsia, and Supporting Vaginal Birth and Reducing Primary Cesareans," according to Cmqcc.org.

To make matters even better, CMQCC also designed state-wide initiatives to tackle common yet life-threatening pregnancy complications like hemorrhaging and preeclampsia. According to the University of Rochester Medical Center, "about 1 in 100 to 5 in 100 women have postpartum hemorrhage," a condition that often occurs with a Cesarean birth. As for preeclampsia, a condition Kim Kardashian West suffered from while pregnant with North West, it affects about 3 percent to 5 percent of women in the United States, according to The Eunice Kennedy Shriver National Institute of Child Health and Human Development.

Although preeclampsia and hemorrhaging are preventable conditions, they sadly cause the death of many mothers. In 2016, Kyira Adele Dixon, the daughter-in-law of TV judge Glenda Hatchett, died from hemorrhaging following a routine c-section at Cedars-Sinai Medical Center in Los Angeles. Just hours after successfully giving birth to a son, "blood tinged urine was seen in Kyira’s foley catheter," according to People. Although doctors tried to save Dixon, she died later that evening due to "hemorrhagic shock, due to acute hemoperitoneum, status post casarean section.”

Although Kyria's death is still under investigation, the CMQCC suggests many doctors and nurses don't know how to best handle cases of hemorrhaging. In addition to a lack of protocols addressing hemorrhaging, "about 30 percent of women who experience an obstetric hemorrhage don’t have an identifiable risk factor," according to Vox.

In response to these concerns, the CMQCC led two state-wide obstetric hemorrhage collaboratives in 2009 and 2011. In partnership with 30 hospitals, the CMQCC introduced "standardized hemorrhage protocols, quantification of blood loss (QBL), hands-on drills and consistency in coding and reporting," according to Cmqcc.org.

One of the tool-kit's essential items is called a "hemorrhage cart," which includes all the items needed to address cases of blood loss. The cart has everything from "medicines that slow the flow of blood, instruments that repair a tear or laceration, intrauterine balloons that can provide pressure and control bleeding from a uterus that isn’t contracting well," according to Vox. Having a hemorrhage cart readily available is extremely important because it saves crucial minutes in the event of an emergency.

Another practice in the tool-kit is called "quantitative blood loss," which means doctors and nurses weigh medical sponges before and after childbirth. By doing so, medical staff is able to determine how much blood loss a mother suffered during delivery. This practice is much more reliable and safe than doctors and nurses simply guesstimating blood loss.

As for the results of the hemorrhage initiative, the American Journal of Obstetrics & Gynecology reported "severe maternal morbidity was reduced by 20.8 percent from 2014 to 2016 among the 126 hospitals participating in the collaborative, compared with only a 1.2 percent reduction in nonparticipating hospitals."

Given the wide success of the initiative, it seems like it would be wonderful to mandate its use in hospitals across the nation (or at least test it in hospitals with high maternal mortality rates, like Texas). No mother should die due to a condition that is preventable, especially when there are tools readily available to save her life. Now that the CMQCC has developed tool-kits to address common complications during delivery, there's no excuse for other states to not follow California's example.