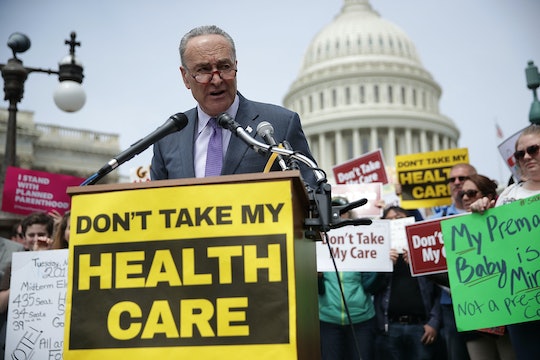 On Thursday, the U.S. House of Representatives voted in a slim margin to approve the American Health Care Act, the GOP's draconian legislation intended to repeal and replace the historic Affordable Care Act. The vote is considered a major victory for President Donald Trump and Republican Speaker of the House Paul Ryan of Wisconsin, who has led the fight against the ACA since before its implementation six years ago. The GOP claims this is a win for the American people, but who the health care bill actually helps are not the people who need help the most.

In essence, young, middle-to-upper class, and rich white men stand to benefit most from the AHCA — aka Trumpcare. According to Vox, the GOP's revised replacement legislation would make significant changes to health care coverage that would burden older people and people with pre-existing conditions, but help those who are considered healthy and earn high incomes. Most notably, the zombified AHCA would hand money over to the rich through tax cuts that the Congressional Budget Office estimated would total up to $883 billion. Vox also reported that the bill would also redirect tax credits to the wealthier Americans by replacing ACA's sliding-scale income-based subsidies with lower, flat rate credits based on age.

In other words, Trumpcare would reverse the Affordable Care Act's efforts to redistribute wealth from the rich to the poor.

So where does this leave everybody else? Out of luck. If you're an older American, a woman, a person living in poverty, a person with a pre-existing condition, a Trump supporter, or a diabetic, you could expect to lose coverage or pay an exorbitant monthly premium.

That's because the version of Trumpcare that passed the House will allow states to opt-out of key ACA provisions thanks to the MacArthur-Meadows amendment. Those provisions include covering essential health benefits such as preventive care and well-baby visits, and barring pricing discrimination against people with pre-existing conditions. Trump has claimed that people with existing health needs would be protected under the AHCA, but according to Forbes, a new analysis found that just 5 percent of Americans with pre-existing conditions would retain their coverage under the new bill.

People who've had a C-section, kids with asthma, adults with diabetes, people with muscular dystrophy, victims of rape, domestic violence survivors, and so many others would be at risk of losing insurance. All of the 11 states with the highest percentage of adults living with pre-existing conditions (meaning 30 percent or more people under age 65) are states that Trump won in the presidential election, according to CNN.

The AHCA would also undo the Affordable Care Act's Medicaid expansion — a vital part of the landmark health care reform that extended health insurance to millions of people living in poverty. Under Trumpcare, people who become eligible for Medicaid would not be allowed to enroll in the program after the coverage expansion ends at the end of 2019, according to Vox. The legislation also cuts the program by $880 billion by converting Medicaid to a "per capita cap" system that gives states either a lump sum of federal money or a block grant, Vox reported.

In response to the AHCA's passage, American Civil Liberties Union National Political Director Faiz Shakir said in a statement that the legislation "aims to take health care coverage away from millions of Americans, costing many of them their lives." He continued,

It’s a giant step backwards to repeal a health care law that has helped end discriminatory policies against women, people with disabilities, people of color, and LGBT people. This cruel bill cuts off access to reproductive health care for millions who depend on Planned Parenthood. It also does grave harm to people with disabilities who rely on Medicaid for critical services that allow them to live in the community instead of an institution.

Americans did not vote to have their healthcare taken away or to have their access to birth control cut off—the popularity of the Affordable Care Act proves that. Millions have marched in the streets, called their representatives, and protested at town halls to protect women’s access to healthcare, and our 1.2 million member-activists will keep rising up in protest and demanding their leaders expand women’s freedom and equality.

The GOP is proud that the House passed the AHCA along party lines. But while they're celebrating, millions of Americans are scrambling to find ways to stay insured. Thursday may have been a day of victory for the Republican establishment, but it also marks the day that healthcare died.

More Like This
Banana Boat Sunscreen Has Recalled Products That Were Found To Contain Benzene
New York Can End Religious Exemptions to Vaccine Mandates, Says A Federal Appeals Court
"Crybaby Ambulance" In Europe Will Help Exhausted Parents
How To Avoid & Treat Lyme Disease