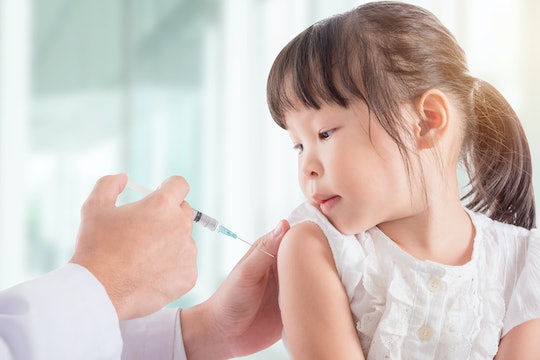 Vaccination remains one of the most polarizing topics in parenting, which is really saying something when you consider how passionate parents tend to get about their children. Many parents want their children to be immunized against communicable diseases, while others are vehemently skeptical about the benefits of vaccinations. There are some parents who refuse to vaccinate their children, regardless of the consequences. But one state has decided to take drastic measures when it comes to protecting children from disease. In fact, unvaccinated kids in Oregon won't be allowed to attend school because of Immunization Exclusion Day. And they could be kept out of school for much longer than just a day.

The state of Oregon implemented a new bill in 2017 that required every public school and child care center to have up-to-date immunization records for each student in attendance. House Bill 3276 was implemented after several small outbreaks of meningococcal disease at the University of Oregon and Oregon State University, an infectious disease that requires vaccination. Since the bill came into effect, the Oregon Health Authority began instituting the Immunization Exclusion Day, when children would be taken out of the school system if their vaccinations for measles, polio, chicken pox, hepatitis A and B, HIB, DPT, and MMR are not current.

Unvaccinated kids will be kept out of school until their parents can provide evidence that their vaccinations have been updated, or that they are legally exempt from being vaccinated, either for medical, personal, or religious reason. Otherwise, as Jonathan Modie, a spokesperson for the Oregon Health Authority, told PopSugar:

Starting Feb. 21, children will not be able to attend class if they don't have immunization or exemption paperwork submitted prior to that date. Records need to have been submitted to the school, by mail or in person, prior to the start of the school day on (Wednesday) Feb. 21. A parent or guardian may submit appropriate documentation/proof of immunization at any time on or after Exclusion Day and their child will immediately be allowed back in school.

Parents can take their children to several locations for their vaccinations; their local health departments, pediatric clinics, or pharmacies can all provide vaccination services. If a parent wants to claim a non-medical exemption, they have a few hoops to jump through before being able to do so. They must first watch an online educational module (or speak to a health care provider who can sign the Vaccine Education Certificate), which takes between 15-60 minutes to watch. After completing the video, parents can print off the Vaccine Education Certificate and fill out the form along with the Certificate of Immunization Status form. Once the child's school or child care center receives both forms, they can return to school.

While every parent needs to make decisions for their own family, it bears noting that vaccinations remain an integral step to protecting the most vulnerable in our community from infection and disease they would otherwise be ill-equipped to fight.

The state of Oregon was dubbed the "most vaccine-skeptical state in the nation" in 2013, and trying to maintain "herd immunity" remains a struggle in the state. Herd immunity, or community immunity, is "a situation in which a sufficient proportion of a population is immune to an infectious disease (through vaccination and/or prior illness) to make its spread from person to person unlikely," according to the Centers for Disease Control and Prevention. Achieving herd immunity is considered the best chance to protect vulnerable individuals like infants and people with chronic illness from communicable infection and disease. In 2017, The Oregonian noted that a full 65 percent of public charter schools did not achieve herd immunity against the measles.

Banning children from school based on their immunization status might seem unnecessarily strict, but protecting the most vulnerable people in society from infection and disease should be considered a serious priority. Particularly when those people who would be most affected by a lack of immunity, children, cannot make these choices for themselves.

More Like This
Can Elderberry Help Prevent Illness In Kids? Doctors Weigh In
What Is RSV?
Kids With Head Lice Don't Need To Miss School, AAP Stresses In Updated Guidelines
What Parents Need To Know After DEA Issues Warning About "Rainbow Fentanyl"