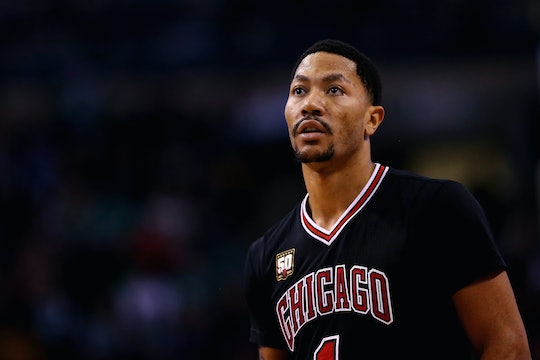 The details of the alleged attack are brutal and visceral: an as-yet unnamed unconscious woman, gang raped in her own bed by a trio of men who allegedly broke into her Southern California apartment one summer night in 2013. Since then, she's worked to conceal the fact that she is the alleged victim behind the civil lawsuit against the most prominent of her alleged assailants, New York Knicks point guard Derrick Rose, from her conservative Mexican family. But a judge has ruled that the 30-year-old must now be named during the trial, and that update in the Derrick Rose rape case is another setback — not just for that one woman, but for sexual assault victims across the country.

Rose and his legal team have consistently denied the allegations, maintaining that the accuser is lying simply to extort him, and attempting to discredit her because she had consented to sex with him in the past. In Rose's telling, he and his friends did have sex with the woman on the early morning of Aug. 27, 2013, but he says it was consensual. He claims that she even let them into her apartment building and then her unit, according to The Washington Post. The woman says she was passed out drunk from a night of partying with Rose and the others and couldn't have consented.

In court documents so far, the woman has been identified only as Jane Doe. If she chooses to move forward with the scheduled Oct. 4 trial — which her lawyer told the Post she is now reluctant to do — her name will be used freely in the courtroom and become part of the public record. That's a daunting, terrifying prospect for anyone who has experienced a sexual assault, and especially someone who does not have the support of her closest family members.

"I want to share my story so women can know that they are able to come forward and remain anonymous and not to have to have the burden or the worry that their loved ones will find out," she told the Associated Press in an interview before the judge's decision.

But denying her that modicum of privacy has been a tactic of the Rose team from the beginning. According to a ThinkProgress examination of documents associated with the case, his attorneys argued against permitting her to use a pseudonym in June because she had posted sexual photos on Instagram:

"It's been that way from Day 1," one of the woman's attorneys, Brandon Anand, said, according to the AP. "It's been very aggressive. There have been threats to leak her name to the public, attempts to depose her parents, who they know very well have no knowledge of this."

In a statement to Romper, Rose's attorney, Mark D. Baute, defended the decision to try to strip the woman of her anonymity. "This is not a rape case, it's an extortion case, and the only victim is Mr. Rose, who is entirely innocent," he wrote. The alleged victim is suing Rose for $21.5 million.

But denying her the opportunity to freely tell her story is a disservice to the victims of sexual assault in the United States who don't report their experiences for fear of having having to publicly relive them, and of having their private lives spilled into the laps of public opinion and subject to outside scrutiny. In the case of Rose's accuser, who was in a nonexclusive relationship with him for about two years before the alleged assault, the court filings contain intimate details about their shared sexual history that she clearly does not want her family to know about. Using her name has a chilling effect on her ability to seek a resolution for her alleged ordeal in the court of law.

According to the U.S. Bureau of Justice, only about 15.8 to 35 percent of all sexual assaults are reported, and not wanting family members to know about it is one of the reasons survivors cite for staying silent.

Victim-blaming, slut-shaming, and intimidation are at the heart of at least the public's push to make the alleged victim's name visible, if not Rose's attorneys'. Although most media outlets do not name victims of sexual assaults even when their identities are readily available, the high-profile nature of this case makes it all but certain that she will be revealed as the accuser within her community and among the people who know her if this case does in fact go to trial. That could be enough to force her to settle and allow Rose to go on with his life, which is exactly what his lawyers are seeking, understandably. It's also exactly the kind of devastating defeat that will discourage other alleged victims from pursuing justice in their own cases.