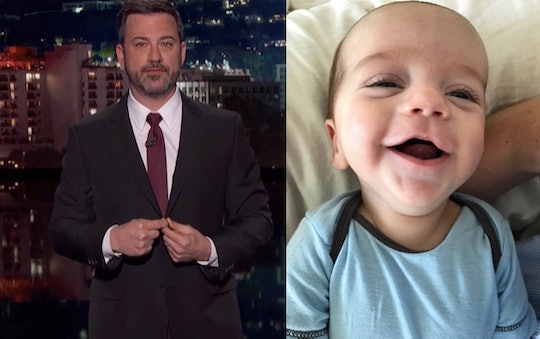 After sharing the heartbreaking story of his newborn's heart surgery in May, fans finally have updates on Jimmy Kimmel's son and happily, he's doing just great. In case you missed it, Kimmel and his wife, Molly McNearney welcomed son Billy in late April. Three days after his birth, he was diagnosed with a rare heart defect and had to undergo heart surgery at the Children's Hospital of Los Angeles.

Almost two weeks after the surgery, Kimmel gave an emotional monologue about his family's ordeal and added in an emotional plea to legislators who were, at the time, voting on repealing and replacing the Affordable Care Act.

Billy will likely have to undergo other heart surgeries, but in a recent interview with The Hollywood Reporter, Kimmel was happy to report that Billy was thriving. The late night show host said:

Young Billy made his first visit to our office today. He's juggling. He's translating Flaubert from French into English. He's really an amazing kid. No — he smiles. That's pretty much it. He is very interested in ceiling fans. He likes those a lot. I could get him to pay the same amount for Netflix just to watch ceiling fans.

That's all very good news. Still, the family has a rough road ahead of them to ensure Billy's health.

Kimmel added that he and McNearney understandably would like to get the other two open heart surgeries "over with and not have to think about it all the time," but, he added, "it could definitely be worse." It could be, but the family is definitely still in the thick of it. Waiting for the tiny guy to get strong enough for more heart surgeries has to be excruciating.

But Billy is obviously a fighter. Check that face out.

This spring, Kimmel said it was one of the scariest things that has ever happened to him:

I felt like I was in an episode of a television show where something terrible was happening. There were a lot of people scrambling around. At that point, I knew there was nothing I could do. They were all very good about keeping me abreast of what was happening, but I wanted them to just focus on him and not worry about me.

Kimmel and Baby Billy were lucky that they had access to great care at such a critical moment. The late night show host used his platform to plead with Americans to see that health care shouldn't be a privilege that people like him and his family could enjoy, but a right that every person needs. The Children's Hospital of Los Angeles is a non-profit hospital that helps children in critical care — but a parent shouldn't have to depend on charity or "hope for the best" when it comes to paying for their child's health care. Or their own, for that matter.

Hopefully, as Congress continues to debate repealing and replacing the ACA, it will remember stories like Billy Kimmel's. And in the meantime, everyone else should send young Billy some good vibes. Not like he needs them, obviously.