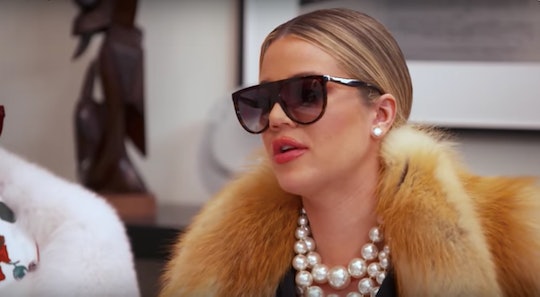 So, Are Khloé & Tristan Together Or What? Here's Everything We Know Right Now — Bible

Ever since the rumors broke last week, it's been hard to keep up with Khloé Kardashian and Tristan Thompson's relationship status. Well, dolls, you're in luck, because I've delved into the depths of social media, anonymously sourced tabloids articles, and seemingly official reports to find all the updates on the Tristan Thompson cheating rumors and what he and Khloé are (allegedly) planning on doing going forward. All so you don't have to.

Because as much as one might want to keep up, it seems like the story changes every other hour. And, I have to remind you, not one of the sources has said, "Bible," after speaking to the press, so how do we know we can even trust them?

Let's start from the beginning. Khloé gave birth to their baby daughter True in Cleveland, Ohio on April 12 — just days after the Daily Mail released a footage that purports to show Tristan allegedly with another woman in New York the weekend before. Just after that video was posted, TMZ released a video that allegedly shows Tristan with two women in Washington, D.C. from back in October. Romper's request from both Kardashian and Thompson's representatives regarding the cheating rumors were not immediately returned. The family hasn't confirmed or denied the rumors publicly, but that hasn't stopped people from coming up with their own stories.

Almost as soon as the videos hit the internet, Kardashian fans were quick to point out that it's entirely possible Khloé knew about the alleged cheating in October and that her mother, all around PR superhero Kris Jenner, had working out a way for it not to be released, according to New York's The Cut. Or that she had finagled their release somehow to coincide with her granddaughter's birth, as reported by Elle, which would sure be something. Then again, when it comes to the KarJenners, there's always tons of speculation.

But there's been a whole lot more speculation about how Khloé is doing, where she's living, and whether or not she and Tristan will stick together. Here are just a few of the most recent Tristan cheating rumor updates since KoKo went into labor.

According to TMZ, Khloé is currently staying at her and Tristan's home in Cleveland, namely because she had set up a nursery months ago. However, a report in People from Wednesday alleges that Tristan is not staying in the same house yet "comes and goes to spend time with his daughter."

That rumor is certainly in line with the other one that has been told to People about Khloé just biding her time until she can return to Los Angeles. According to those outlets, the new mom is just waiting until she and little True Thompson are cleared, medically, to fly, and then she's hitting the road. An insider told People, "Yes, she would like to be back home in L.A., but she’s also doing what’s best for her child. She wanted to give the baby time to adjust and to literally stay alive, so she’s of course following doctor’s orders.”

Nothing Has Been Decided Yet

A source close to the family told E! News that things are a little rocky, but that the family of three are all under one roof at the moment. According to E! News, this source said:

Her and Tristan are very much still up in the air. He has been staying with her and the baby at the house, but also has been gone a lot due to his schedule. They are both head over heels and obsessed with their baby, and they haven't had time to focus on what the next move is.

A source close to the family reportedly told Us Weekly that Khloé loves "unconditionally" and will forgive Tristan once the media attention dies down. Remember, these sources say, her ex-husband Lamar Odom reportedly cheated on her and put her through a lot of drama and she always came back to him eventually (for a bit). The source said:

She’s willing to forgive Tristan. No one can understand how she can forgive someone who has cheated on her so much … How can she ever trust him again? How can she ever believe him, with anything? The level of lies is crazy … But we’ve seen her do the same with Lamar [Odom]. She’s willing to forgive this massive indiscretion because she simply loves them.

Just days after True arrived in this world, a source reportedly told People that Khloé was too "consumed" with love to be angry at Tristan. The source said:

She’s basically already forgiven him. She is in a bubble of love and peace and happiness right now, and everything that happened with Tristan is less about "cheating" and more like, it was just a random drunken hookup that meant nothing and was kissing at most and didn’t lead to anything else and was the fault of stupid groupies trying to trap him, and everybody just needs to move on.

Khloé Hasn't Even Thought About It

A source reportedly told E! News that the new mom hasn't even thought about what to do yet and has been "traumatized" by the whole thing. This source said:

Khloe has been in a daze since True was born. Everything happened really quickly, from the scandal to her water breaking shortly after, then to giving birth. She is a bit traumatized by the situation with Tristan, and is quite embarrassed, but is focused on the baby now and not the negativity surrounding her relationship.

Kris Is Going To Butt In

According to another source who reportedly spoke with Us Weekly, Momager Kris Jenner is getting nervous about how long her daughter's stayed in Cleveland since the alleged cheating rumors broke. This person told Us Weekly:

Kris is concerned that the longer Khloé stays in Tristan’s house with their daughter, True, she won’t move back to Los Angeles as she had indicated she wanted to do before she gave birth in the aftermath of his cheating scandal. Kris has been a constant presence in the house, helping Khloé with True. Things have been strained with Tristan, but she has forgiven him. Their relationship is still very much up in the air.

No matter what's actually, really, truly going on in Cleveland or Khloé's head, let's all try to remember that she's just a human being, okurrr? Let the woman live and raise her daughter. But please do continue to come up with some inane fan theories, because I bet $1 million that Khloé and Kim are getting a kick out of reading them and making fun of us for spreading them around the internet.