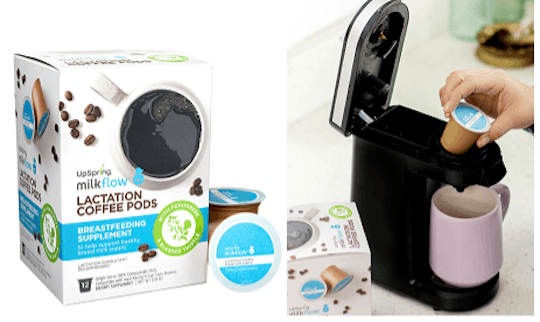 Ever been drinking a cup of coffee, and thought quietly to yourself: man I wish this cup of joe would help me produce more breast milk... If so, then you will be thrilled to learn about the new Milkflow Fenugreek and Blessed Thistle Lactation Coffee Pods from Upspring. You read that correctly. There are now Keurig cups that claim to increase breast milk production.

Each pod brews up like a regular cup of coffee, but contains both fenugreek and blessed thistle — two plants known to be galactagogues. (Yes, I know "galactagogue" sounds like a religious leader on Star Trek. But it's just a fancy word for something that boosts lactation.) They're also made from all natural ingredients, and are non-GMO and gluten-free. They do contain caffeine, but only 55 mg per serving, which is safe for nursing moms. (La Leche League says up to 300 mg of caffeine a day is OK.)

And if you're concerned about the waste produced by K-cups, and with filling your newborn child's future planet with more garbage, well good news: the pods are 100% compostable.

As for how they taste... well, the reviews seem pretty good, actually, with many reviewers raving about the tastiness. As for whether or not they work, well, that's likely going depend on the person. (I know I noticed zero difference when I had fenugreek when I was nursing. But another mom told me the herbs turned her into a total milk faucet...)

While the pods apparently even have the seal of approval from a lactation consultant (it says so right there on the box), when I reached out to Thaisa Lemos IBCLC for her take on the pods, she urged caution. "Many herbs, although natural, can have side effects when consumed in any form. Generally speaking, galactagogues (food/supplements that could increase milk supply) should not be consumed without the guidance of a qualified health care practitioner — an MD, an RD, or an IBCLC."

And Lemos' list of possible side effects is no joke: "In general, fenugreek is not recommended for people with a family history of peanuts/chickpea allergy (it also comes from the legumes family), diabetes/hypoglycemia (it has glucose-lowering properties and can cause blood sugar to drop), clotting or bleeding conditions (it has anticoagulant properties), sensitive guts (it can cause gastric distress in both nursing parents and babies, such as diarrhea, cramps, vomiting, nausea, etc.), and thyroid dysfunction (it can affect thyroid hormone levels), for instance."

OK. So, yeah, maybe check with your doc or your own IBCLC before popping a pod into your machine.

I'll be honest — my initial reaction to this was a little "yuck." Because it for some reason made me imagine breast milk inside the K-cups. The name "Milk Flow" just makes it sound like you're going to grab a mug and brew yourself a cup of breast milk, no? But obviously, that is not at all what's happening here. You are simply making yourself a tasty cup of coffee. That may or may not engorge your boobs. Which is more than I can say for my Starbucks Blonde Roast.