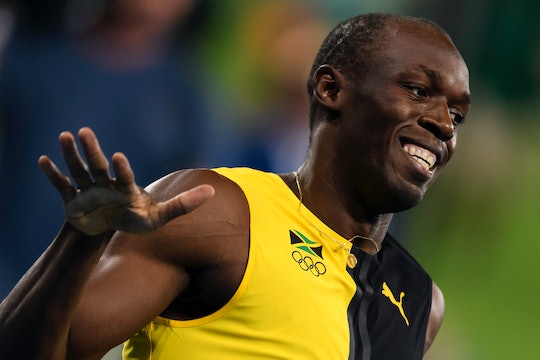 It looks like the fastest man in history has taken a moment to slow down and revel in his family's sweet new addition. On Tuesday, Olympic runner Usain Bolt introduced his baby daughter with a precious photo and not only is she totally adorable, but her name is truly the coolest.

Back in May, Jamaican Prime Minister Andrew Holnes announced on Twitter that Bolt had welcomed his first child to the world with girlfriend Kasi Bennett. At the time, Bolt did not make an official announcement, but Bennett did share a sweet video ahead of their daughter's birth. "Cloud 9.58. Celebrating our greatest blessing, Princess Bolt," Bennett captioned a video that appeared to be from their baby shower.

Since then, the new parents have been keeping a low profile on social media. On Tuesday, however, Bolt shared a photo of his new daughter on Twitter and revealed their little girl's name: Olympia Lightning Bolt.

Yes, Usain Bolt's daughter is named Olympia Lighting Bolt. Because if your last name is Bolt and your father is known as the "fastest man alive" and you don't get Lightning in the name somewhere, that would be a wasted opportunity.

In an Instagram post featuring photos of his baby daughter and Bennet, both looking ethereal in flowing dresses, Bolt wrote a birthday message to his partner. "Now we have started a new chapter together with our daughter Olympia Lightning Bolt I look forward to what the future will bring for us but be reassured that I will be the ROCK for this family," the new father wrote.

Bolt's choice for his daughter's name has already gotten the social media thumbs up from his Instagram followers, with people leaving comments like, "The name of a legend! She’s beautiful," and "She is so cute and this name fits perfectly."

Sports fans will be well aware that Olympia Lightning Bolt is not the only celebrity child named Olympia out there. Yes, there is Oscar-winning actress Olympia Dukakis from the 1987 Cher vehicle Moonstruck, but there's also another baby whose mom was an Olympian herself. Alexis Olympia Ohanian Jr., daughter of tennis great Serena Williams and Reddit co-founder Alexis Ohanian.

Maybe they'll become friends and then they can rule the Olympic games of the future as the two Olympias. They do, after all, have those names to live up to. But for now, Usain Bolt seems to be simply basking in his sweet daughter with the amazing name. Lucky him.