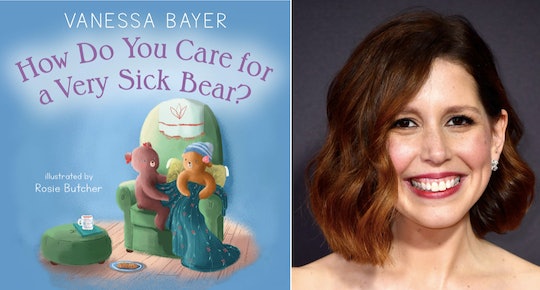 Having a child diagnosed with a serious illness is, of course, scary for parents, but it can be even more frightening for kids who can't fully understand what's going on or why. Fortunately, there are ways to make this tough time a little easier, including programs for sick children and books that can help make the reality a little less harsh. Vanessa Bayer's new children's book How Do You Care For A Very Sick Bear, for example, aims to help and comfort kids who are coping with serious illnesses.

The Saturday Night Live personality wrote the book after her own leukemia diagnosis at 15, which she said she got through, thanks to a supportive group of friends, according to Cleveland Magazine. "It’s really difficult for anyone, when a friend of theirs gets sick, to know what to do. That’s particularly true for children," she told Cleveland Magazine. "A lot of kids deal with this and have friends who get sick or are going through something traumatic. I think it’s helpful in a children’s book format for kids to learn about it in a way that feels less scary for them."

How Do You Care For A Very Sick Bear focuses on how to be a good friend to someone who is sick, according to Parade. It's a story that the 37-year-old Cleveland, Ohio native told the publication is "close to [her] heart" and she hopes this book will inspire friends of kids in similar situations to do the same.

"When I was sick I couldn't go to school but, luckily, I had a wonderful group of friends who rallied around me," she told Parade. "They told me all the school gossip and all the things going on that seem very important when you're in ninth grade... Then, when I felt healthy enough to go to things, they would include me and when I couldn't, they made me feel like I was still a part of things. There's nothing like that human connection."

The children's book has been well-received by the public thus far, as evidenced by its GoodReads' score. One reviewer called it a "beautiful and gentle book" that's not only "great read for kids, but even adults, too."

Comedian Amy Schumer, who recently welcomed her first child, also praised Bayer's book on Instagram, calling it "beautiful." Schumer wrote, "It is such a beautiful book and everyone should buy it for their children. Especially if they have dealt with illness. Vanessa [had] leukemia as a teenager and I wish her friends had this book back then! I am so proud of her and this book she has made come to life."

Bayer previously opened up about her battle with leukemia in an interview with HuffPost. She revealed that as a teen, she was diagnosed with acute lymphoblastic leukemia (ALL), which is a type of cancer of the blood and bone marrow, according to the American Cancer Society. Her treatment, as she told HuffPost, lasted "about two-and-a-half years," while it was understandably "difficult" to go through as a teen, surviving cancer is what gave her her sense of humor.

"I do think surviving something like that definitely affected my sense of humor and made me want to go into comedy because my family, my friends and I all laughed about it a lot," she shared with HuffPost in December.

Getting through a cancer diagnosis can be truly horrifying, but having resources like Bayer's book, How Do You Care For A Very Sick Bear, can hopefully ease the pain. Bayer's book is available on Amazon.