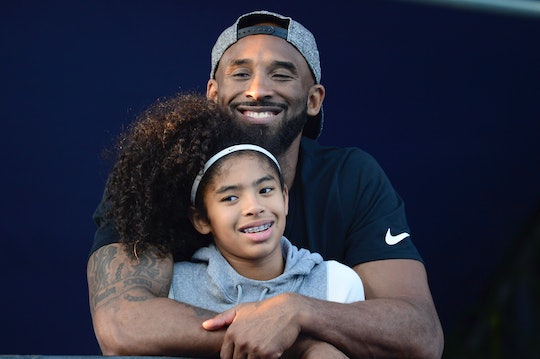 It's been three months since NBA legend Kobe Bryant and his daughter Gianna died in a helicopter crash, along with seven others, and their family has continued to remember them in the most touching ways. On May 1, Kobe and Vanessa Bryant's daughter, who also went by Gigi, would have turned 14 years old and her mother marked the day with a loving, emotional post on Instagram.

"Happy 14th Birthday to my sweet baby girl, Gianna. Mommy loves you more than I can ever show you," Vanessa, who welcomed four daughters with her husband of nearly 20 years, captioned an adorable photo of her daughter dressed in Mickey Mouse gear. "You are part of MY SOUL forever. I miss you so much everyday. I wish I could wake up and have you here with me. I miss your smile, your hugs and your giggles."

Shortly after sharing her loving birthday tribute, the mother of four posted a series of photos of red bracelets with "Gigi Bryant" and "Mambacita" written on them. "Gianna loved to wear a red bow in all of her school pictures. Red means love and life," Vanessa wrote on Instagram. "To commemorate Gigi’s birthday today, please consider wearing red, caption an act of kindness or show how you will play Gigi’s way since she always gave everything she did her all and led with kindness."

Since her husband and daughter's tragic deaths on Jan. 26, Vanessa has shared several photos on Instagram about them, ensuring neither one of them is forgotten. On April 18, for instance, she marked what would have been 19th wedding anniversary with the former Laker.

"My king, my heart, my best friend," she captioned a photo of them curled up together. "Happy 19th wedding anniversary baby. I miss you so much. I wish you were here to hold me in your arms. I love you."

The past few weeks and months have undoubtedly been difficult and emotional for Vanessa and hopefully she found solace in the many tributes that poured in on Friday to honor her daughter. "Happy birthday Gianna Bryant," one fan tweeted. "Would’ve been 14, had so much life to live. Praying for Vanessa a lil extra tonight." Another wrote on Instagram, "Happy birthday to GiGi... sending you and the girls much love."