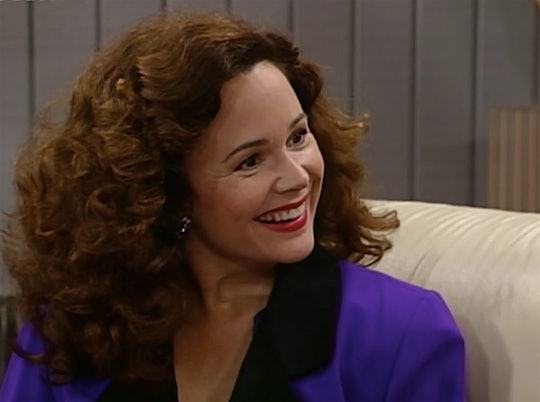 When it comes to a beloved, nostalgia-based series like Fuller House, surprise reunions aren't just encourage, but highly expected. So when Danny's ex-girlfriend, Vicky Larson, returned in Fuller House Season 3, I wasn't all that surprised, though that didn't make her cameo any less enjoyable. Warning: Season 3, Episode 18 spoilers ahead!

For those of you who need a little refresher, Vicky and Danny dated for the better part of three seasons. Her character, played by Gail Edwards, was introduced in Season 5 and continued to show up in various episodes until midway through Season 7. Vicky joined Danny as his co-host for Wake Up, San Francisco while Becky was on maternity leave with the twins, Nicky and Alex. Their relationship was somewhat strained at first once, but eventually grew into love. In fact, Danny even went so far as to propose to her in Disney World, to which she said yes.

However, their engagement didn't last very long once Vicky received a news anchor job offer in New York City, which she decided to take. It was a heartbreaking end to a very sweet romance, but they parted on good terms and that made their reunion on Netflix all the more enjoyable. I'd even go so far as to say that it felt like she'd never left.

The two of them sat down on the couch to catch up and it took Vicky no time to start poking fun and reminiscing about Danny's old habits. She wondered whether he still vacuums his refrigerator everyday, to which he informed her of his much more laid back ways. (He only does that every other day now.) Suffice to say, she couldn't believe how much of his life has remained the same. Even the furniture hadn't changed one bit.

Now, considering this was the last episode of the season, there wasn't much time for anything else other than a quick catch-up session. But Danny invited her to the Dads-iversary party they were having later that night to commemorate the day Uncle Jesse and Joey moved into the house 30 years ago. She happily accepted, so the only question that remains is, where will things go from here?

I can't deny that Danny and Vicky made a great team and the only reason they broke up was because of distance. If that's no longer an issue, then it's possible these two could end up getting back together. After all, Danny did just declare that he's moving back to San Francisco (and back into D.J.'s house, much to her chagrin). Perhaps Vicky will be in the area as well and interested in starting things up again.

Like I said, nothing has been confirmed. They remained exclusively in the friend-zone throughout the entire time they were on-screen together. But who knows what could happen down the line if they started seeing more and more of each other. Feelings like theirs don't just go away, right? Maybe the stars have now finally aligned for them. Only time will tell, but I'll admit that I'm very eager to see where this leads.

In the meantime, I would take this opportunity to go back and rewatch their relationship on the original series. As luck would have it, the entire collection of Full House episodes are available for streaming on Hulu right now, so it couldn't be easier. It'll help you remember how great they were together and get you excited for their potential future. If this show has taught me anything, it's that anything is possible with that Tanner/Fuller magic by your side.