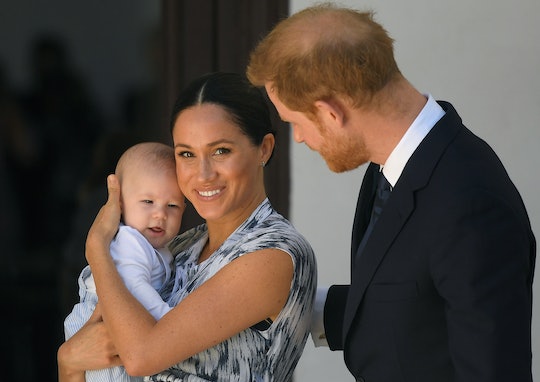 The Duke and Duchess of Sussex have been busy making the rounds in the first few days of their African tour. And while the world has been watching them support important causes, fans have been anxiously awaiting a peek at their 5-month-old. And the video of Baby Archie cooing with Meghan Markle and Prince Harry shared on their Instagram Story was certainly worth the wait! It is quite possibly the cutest thing you'll see all week.

Prince Harry and the family arrived in South Africa on Monday, but Archie's outing on Wednesday marked his first appearance on the tour, as Cosmopolitan reported. The sweet video — posted to Sussex Royal's Instagram Story Wednesday morning and then subsequently to Twitter— shows Prince Harry, Markle, and Master Archie walking down a hallway on their way to meet the Archbishop Desmond Tutu and his daughter Thandeka at his legacy foundation, according to Marie Claire.

Markle can be heard in the video saying "Here we go," and making clicking noises at little Archie as they walk. Prince Harry then says, "Arch, you're gonna meet Arch!" to which Markle responds, "Hey bud," or "Hey bug," it's not totally clear which. When Prince Harry says to the boy, "Arch, Arch," Archie lets out the sweetest baby giggle in the history of time.

Along with introducing Archie to Arch, Prince Harry and Markle visited the Archbishop's foundation to learn more about the important work going on there. As the organization works on the development of youth and leadership, the introduction of yet another generation of royals to the Archbishop's social outreach efforts is symbolic, Niclas Kjellstromn-Matseke, chairman of the Desmond and Leah Legacy Foundation, told People.

“Archbishop Tutu met the Queen and had a great relationship with her and here is her grandson,” he said. “This is a generational thing. This is a hand over from the elderly to the younger.” Prince Harry had also previously met the Archbishop on a 2015 tour of the country, according to Harper's Bazaar, when Prince Harry presented an award to the Archbishop for his efforts to promote world peace.

The family's visit to Africa this year has a busy itinerary. Prior to the tour, a royal spokeswoman shared some of the details with the public. "Their Royal Highnesses are very much looking forward to their arrival in Africa tomorrow on their first official tour as a family," she said, according to Hello!. "As you well know, Africa holds a very special place in the Duke of Sussex’s heart and he is looking forward to sharing South Africa with Markle and their son. It is a really busy program, four countries in ten days, and we have an extra special small passenger to make things more lively."

Prince Harry is scheduled to continue on from South Africa to engagements in Botswana, Angola and Malawi, People reported. But Markle and Archie are expected to remain in South Africa for the remainder of the visit. No schedule for mom and baby has been released as of yet, but they will surely be engaging in all kinds of meaningful and adorable interactions around the country. Is it too much to ask for more photos and videos? Even so, please Meghan?