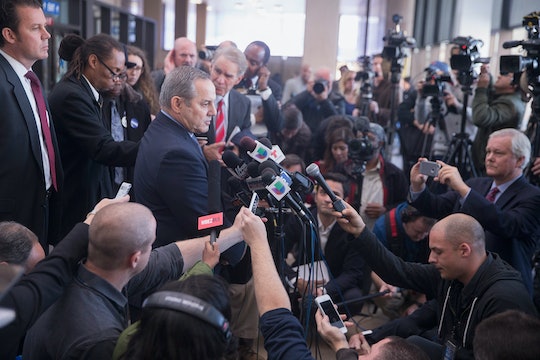 On Tuesday night, hours after Officer Jason Van Dyke was charged with the murder of a 17-year-old, the Chicago Police released the video of Laquan McDonald's death captured on Van Dyke's dash cam. City officials worry that the release of the video may cause unrest in Chicago, similar to the demonstrations that occurred in Ferguson, Baltimore, and Missouri after the death of black men at the hands of white policemen. Van Dyke turned himself in Tuesday, just over a year after McDonald's death.

The dash cam footage, which is hard to watch, shows Van Dyke exiting his squad car, shooting McDonald, and continuing to fire — 16 bullets in total — even after the teenager had fallen to the ground. Van Dyke's lawyer, Daniel Herbert, said his client feared for his life and those of other police offers. However, none of the other officers on site fired shots, despite having been at the scene before Van Dyke and having followed McDonald for nearly half a mile after catching him breaking into vehicles.

At a press conference earlier, Chicago Mayor Rahm Emmanuel and Chicago Police Superintendent Garry McCarthy gave a press conference in which they released the video gave the media access to the video for an hour "due to limited bandwidth." Protestors have already begun gathering in Chicago after the release of the video.

Before the video, officials and city leaders spoke out, asking Chicago to remain calm in light of the disturbing footage. Reverend Roosevelt Watkins, from Pastors United for Change, told ABC, "Chicago is on the tipping point. We can be just like Ferguson."

More Like This
Jenny Han Wanted Both Moms & Teens To Feel Seen In 'The Summer I Turned Pretty'
Is It Safe To Keep Using Period & Fertility Apps In A Post-Roe America?
Some Movie Theaters Are Banning Teens Dressed In Suits As Part Of Viral 'Minions' Trend
12 Of The Best Hallmark Christmas Movies To Watch In July