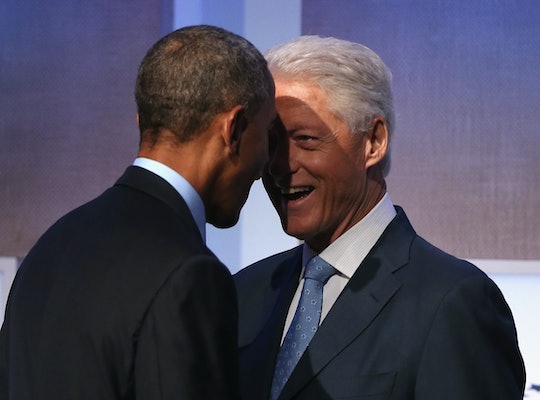 If you thought that watching former President Bill Clinton gleefully play with balloons at the end of the Democratic National Convention was everything you needed to make your life complete, there's more where that came from. The former president is obviously living his best life, as this video of Obama trying to rush Bill Clinton onto Air Force One shows. Seriously, you can watch this on an endless loop and it will never not be funny. Apparently, Bill Clinton is that friend that everyone has that sort of goes off script now and again and just is never on time.

Obama is smiling throughout the video, but that's just because he's a smart guy and knows that the cameras are on. He looks honestly irritated in that way you you do when your mom starts talking to the neighbor while you're trying to rush to dinner or something. All smiles but losing patience second by second.

The two were attending the funeral of Israeli President Shimon Peres in Tel Aviv and Obama gave a eulogy. But will was too busy schmoozing on the tarmac. "Let's go, Bill," Obama yells from the plane, shaking his head. It's like your kids waiting for you to leave a family party they didn't want to go to or pulling your very drunk friend away from the karaoke machine on a Friday night. "We gotta go home!," the President yells. It's everyone who has ever lost their patience and wanted to hit the road.

Finally, Clinton walks up the stairs with his arms outstretched in the classic, "whaddya want me to do, blow off world leaders?" They're laughing, but from the look of Obama talking to someone waiting on the plane with him, trying to get Bill to do anything is like herding cats, all the time.

The pseudo-bromance between the two men of them is very, very amusing. Obama is a funny guy, but he's a serious dude, who rolls up his sleeves and gets to work. Obama has to go home, because he has actual things to be doing. Bill Clinton is sort of less serious, in general and getting to see him as a presidential spouse instead of a formal world leader means Americans are getting a lot more "authentic Bill." That's been helping and hurting Democratic nominee Hillary Clinton in her bid for the presidency. He can win over audiences in speeches, but Clinton's past extramarital affairs paired with the sometimes dumb things he says about his wife aren't exactly helping her push ahead.

I would love to be a fly on the wall when Hillary and Bill speak to each other. Or even just listen to Hillary and Obama commiserate over trying to get "Billy," as the President called him, to leave a party. Meanwhile, I'll content myself with this video. We gotta go home, Bill.