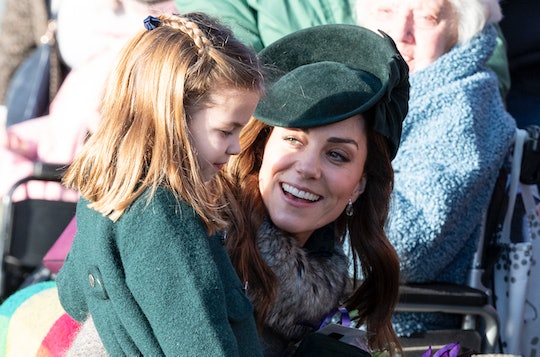 This Christmas was a pretty big deal for the royal kids. Not just because the two oldest Cambridge children at their optimum Santa years stage of life, but this was also the first year Prince George and Princess Charlotte joined the rest of the royal family for the annual walk to church on Christmas Day. And as if that wasn't precious enough, there's actual video of Princess Charlotte curtsying after her mom Kate Middleton did the same for Queen Elizabeth. Don't even get me started on how adorable this kid is, I can barely stand it.

Middleton and Prince William have been joining Queen Elizabeth on her annual walk from her Sandringham Estate to St. Mary Magdalene Church on Christmas morning for years. Ever since they were first married in 2011, and Prince William has, of course, been doing it most of his life. But they have never brought their children along until this year.

While 1-year-old Prince Louis stayed home for the morning, presumably enjoying his gifts, 6-year-old Prince George and 4-year-old Princess Charlotte donned beautiful wool coats and walked alongside their parents on their way to church on Christmas morning. As their 93-year-old great grandmother Queen Elizabeth was driven back to Sandringham Estate, Princess Charlotte stood beside her mother to wave her off. And then surprised everyone by dropping into a brief, perfect curtsy after watching her mother. As though she had been doing it for years.

While no one is technically expected to curtsy when they see Queen Elizabeth, it has become an unspoken custom for women to do so as a sign of respect. The Duchess of Cambridge (who I am pleased to report wore forest green pumps that matched her daughter's dress perfectly) has become well known for her simple, gracious curtsy. And it looks as though her little girl has adopted a pretty similar one because it honestly looked effortless.

As for Prince George, he also had something of a special moment on Christmas: He wore full-length pants just like his dad. This is noteworthy since he's mostly been seen in short pants over the years. Why? As etiquette expert William Hanson explained to Harper's Bazaar, young boys dressed in short pants is a "very English thing" to do to indicate a certain social class. "... A pair of trousers on a young boy is considered quite middle class — quite suburban," Hanson explained to the magazine. "And no self-respecting aristo or royal would want to be considered suburban. Even the Duchess of Cambridge." So it seems Prince George is growing up quite fast.

As sad as it sort of is to see the royal kids getting so big, it's also exciting to see them turn into the people they're becoming. Tiny little versions of their parents who wear beautiful wool coats and know how to curtsy like a pro. Merry Christmas indeed.

More Like This
Can You Light Fireworks In Your Backyard?
20 Family-Friendly Movies To Watch With Your Kids On The 4th Of July
Bright & Festive Nails To Rock On July 4th
Festive Fourth of July Sparkler Crafts