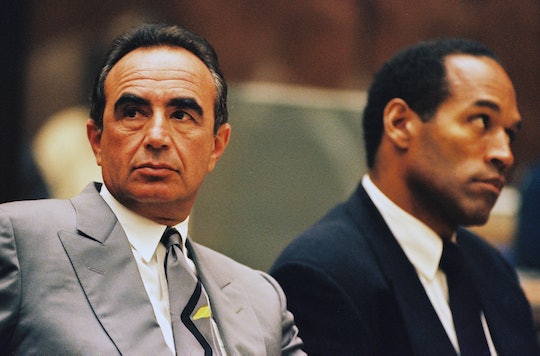 Video Of Robert Shapiro At The Real O.J. Simpson Trial That All 'American Crime Story' Fans Should Watch

The People Vs. O.J. Simpson: American Crime Story, a new series on FX which covers the trial of O.J. Simpson who was accused (and acquitted) of murdering his then-wife Nicole Brown Simpson and her friend Ron Goldman, has many of us caught in a time warp. It's suddenly the last few months of 1994 again. Of course, it's not 1994, because we have internet. Which means getting re-obsessed with the Simpson trial is not only possible but super easy. For instance, want to take a trip down memory lane and watch a video of Simpson defense lawyer Robert Shapiro schooling the prosection in the real trial? We've got an app for that!

Okay, not literally, but at least it's pretty simple to track down. See back in olden times, you had to just hang around and wait for things to come on television. We had to schedule our lives around our entertainment. It was an archaic, manipulative system that made everyone miserable and (I'm pretty sure) had people calling in sick for work way more than necessary. Now you can just watch stuff while you work which is way more efficient! So for all of you curious minds out there hell bent on getting the lowdown on the Real Thing, here you go.

This is from the early days of the Simpson case, when nobody knew much about what was going on and the police remained tight-lipped with the media, despite ominous rumors of bloody gloves, among other things. One of Simpson's original lawyers, Howard L. Weitzman, had just excused himself from the case citing a heavy workload and a close, personal friendship with the NFL star. Shapiro, instead, was a new face to the story and came out with fists flying. According to The New York Times, Shapiro argued that Simpson had been "at home at the time of the slaying and had no connection with it."

Putting The Heat On Prosecution Witnesses

Here we see Shapiro and his fellow defense team member Johnnie Cochran (looking smug a.f. here, if you ask me) questioning Dr. Michael Baden, a forensic pathologist who examined the bodies of the victims and testified that the victims put up a significant fight that would have left marks on their attacker. Baden testified that the murders would have taken some time to complete, at odds with the prosecution's assertion that the double murder could have been executed within 25 minutes. And you could basically feel the prosecution sweating through the TV at this point, by the way.

Turning The Attention Away From His Client

As most of the world already knows, no murder weapon was found in the Simpson case. Which probably isn't the first time that's happened, but if you're able to link the lack of a murder weapon to police ineptitude and racial overtones... well it looks like you just might have a case on your hands.

And now I leave you with another bit of gold — John Travolta as Robert Shapiro in The People Vs. O.J. Simpson: American Crime Story. Just because it's fun to compare and contrast.

Whether we're talking about Travolta's incarnation of the defense attorney or the real guy himself, tuning into any Shapiro argument is pretty much courtroom gold.